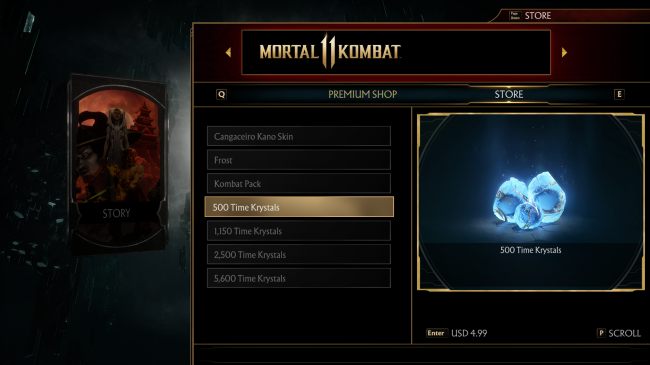 Our esteemed fighting games guru Mr Toffee praised Mortal Kombat 11 but also touched upon how the game can be a huge grind for many. This is the bit where we have to break it down, possibly to explain why it’s getting a lot of flak on its Steam page.

This new version of MK Deadly Alliance’s female Sub-Zero clone -who is pretty badass in MK11 by the way- can be yours for US$6. However, you can unlock Frost for free in the story mode. MK11’s screens and prompts made no mention of this.

To which we say: no. It only takes an hour or so to get to Chapter 4 of the story mode, and you can skip most of the cutscenes if you’re REALLY in a hurry. Why waste US$6 on a character who is free in the first place?

The Resources You Need For Unlocking

Never mind the fact that you need to be online to play Towers of Time and unlock stuff in The Krypt, you also need materials and currencies to even bypass most of it.

You earn these through playing the game or spending US$5 for 500 of them. You need them to purchase cosmetic items in the Premium Shop.

The in-game currency needed to unlock/restock loot chests in the Krypt. You earn these by playing the game. A lot. Story Mode, Towers, online play; the works.

You need these to open up new areas of the Krypt. You get them through winning fights. The more points you earn in a fight, the more fragments you’ll get.

You need these to open up special unlocks in the Krypt. You earn them by performing Brutalities and Fatalities, as well as complete single-player challenges in the Towers of Time.

If you care a lot about unlocking all the cosmetics and window dressing for the game, you’ll be grinding for these currencies a lot. It doesn’t ruin the basic meat and gameplay at all; you can still kick ass full-time with all the characters in the roster. Unless you didn’t get the pre-order Shao Kahn in which case, bully for you.

Luckily, NetherRealms creative director Ed Boon said that all of this will be reworked. He tweeted the following: “we have a hot fix/improvements koming to address those super hard Towers of Time, as well as better rewards/economy to be used in the Krypt.”

In case you missed yesterday’s Kombat Kast: We have a hot fix/improvements koming to address those super hard Towers of Time as well as better rewards/economy to be used in the Krypt.

Will keep you posted??

Despite the fact that you’ll be spending loads of time unlocking cosmetics, you’ll still spend lots of time playing a really good fighting game. Like Mr Toffee mentioned, the game’s tutorials are awesome, the characters are varied and plentiful, and the fatalities toe the line between disgusting and goofy.