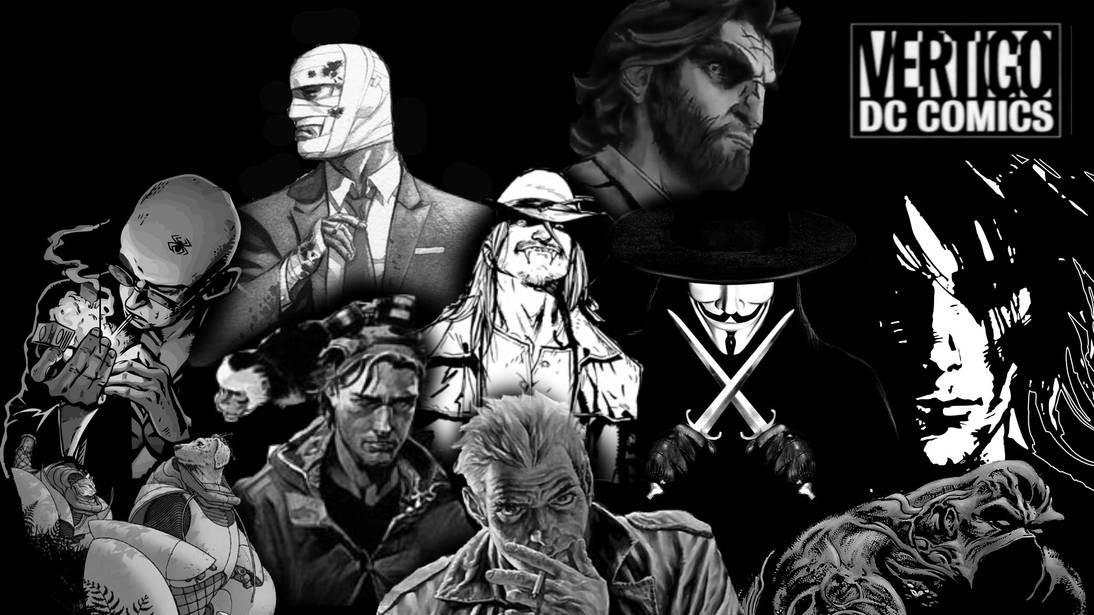 After almost three decades of adult-themed comics, DC Comics is shutting down its Vertigo imprint, which will be absorbed into DC Black Label, one of three new age-appropriate labels.

Launching way back in 1993, the Vertigo Comics imprint was best known for publishing comic books and graphic novels without the content restrictions of mainstream comics, providing comic book writers and artists an avenue to go all the way with their ideas, no matter how mature or unconventional they were.

The legacy of Vertigo will continue on, with many of its titles now considered to be iconic classics and nominated for or won Eisner Awards (the Oscars/Grammy equivalent in the comics industry) in the course of its run. Here are ten of the best titles published from the imprint in the past 23 years:

While iZombie is relatively new in the Vertigo’s long-running lineup of comics, writer Chris Roberson teamed up with phenomenal artist Mike Allred for a series that subverted common tropes of zombies (and the horror genre at large) in pop culture in smart and funny ways.

It’s basically about a girl named Gwen Dylan, who is a zombie. She needs to eat brains to avoid going full-on zombie, so it’s a good thing that she works as a gravedigger. What’s not so good for her is that she partly inherits the behaviour and memories of the person whose brain she eats.

There’s a currently ongoing TV series adaptation of iZombie, which is pretty decent considering the CW essentially turned it into a crime procedural and changed almost everything from the source material. Still, the best part of the TV series is watching protagonist Olivia Moore becoming a different person every time she eats someone’s brain.

Doom Patrol, Swamp Thing, and Animal Man are now part of the main DC Comics universe but things were different about 20 years ago. These IPs were struggling to fit in the main canon, so they were then published under the Vertigo imprint to allow creators to go wild with these titles.

Alan Moore started his influential Saga Of The Swamp Thing run while Grant Morrison went totally bonkers and bizarre with both Doom Patrol and Animal Man. These legends almost single-handedly shaped these previously-unpopular IPs into some of the most celebrated in comics history, and all of this started at Vertigo.

Written by none other than Warren Ellis, Transmetropolitan is a comic book starring gonzo journalist Spider Jerusalem, who dedicates himself to fighting the extremely corrupt government of a future U.S. in a cyberpunk transhumanist dystopian setting.

This book is political satire at its best, and the what’s disturbingly scary about it all is how it remains as relevant as ever in today’s political climate (the U.S. under the Trump administration) as it was back in the era when it was being published from 1997 to 2002.

Check it out if you want to see what the future will be like if things continue as they are now. Yikes.

This is the comic that was so wacky and trippy that writer Grant Morrison actually claimed that the story for The Invisibles was narrated to him by aliens after he was abducted during a trip to Kathmandu. Welcome to the 90s, folks.

The Invisibles is about a group of dysfunctional heroes with weird abilities (one of whom is transgender and another is a Buddha-to-be), who fight against threats to humanity’s natural progress, including interdimensional alien gods, time-travelling shenanigans, and AIDS. No, really.

One of the most influential graphic novels of all time, V For Vendetta is a timeless classic written by Alan Moore, depicting a dystopian near-future version of the United Kingdom controlled by a fascist, white-supremacist and homophobic government who imprisons dissenters in concentration camps. Sound familiar?

The protagonist V, an anarchist revolutionary rebel, is so iconic that his depiction of wearing the Guy Fawkes mask is so iconic that it has influenced real-life events as it is now widely used as a symbol of revolution and protest against oppression.

Not to mention the excellent movie adaptation starring Hugo Weaving as V and Natalie Portman as his protege Evey Hammond, which remains one of the best comic book movies to this day. If you haven’t watched it, it’s even available on Netflix right now.

Y: The Last Man isn’t your typical post-apocalyptic story. This was the comic book that made Brian K. Vaughan the celebrated writer he is today. It’s got everything from mystery and romance to horror and social commentary.

Set in a post-apocalyptic setting where aÂ mysterious plague has wiped out the male population of Earth, wannabe street magician Yorick Brown is literally the last man in the world. He goes on a journey to find his girlfriend, encountering allies and enemies along the way.

Every issue (sixty in all) of Y: The Last Man is an event in itself, and will leave you wanting for the next one. After years of being stuck in development hell, a TV series adaptation is set to premiere sometime in 2020, starring the likes of Barry Keoghan and Imogen Poots.

Written by Garth Ennis and the late legendary artist Steve Dillion (may he rest in peace), Preacher isn’t a comic for the easily-offended or those with religious sensitivities. It challenged religious themes in a way that no other comic has done before or since.

Preacher follows protagonist Jesse Custer, a disillusioned small-town preacher whose body becomes host to Genesis, the offspring of a demon and an angel (who is very much God’s equal). He then goes on a journey to find the one true God and demand answers.

The blasphemy and ultra-violence make for an outrageously-fun experience, one filled with secret organizations, vampires, and a disfigured character named Arseface. Preacher is one of the few comic books I never thought could possibly be adapted into live-action, but the folks at AMC managed to do it, and it’s currently four seasons in.

Neil Gaiman’s Sandman is one of the most epic and iconic fantasy comic books out ever. It was also the flagship title of the imprint and is still a literary achievement in the comic book medium the likes of which warrants its own deep mythology.

Sandman follows the saga of Morpheus or Dream of the Endless, one of seven siblings who embody different aspects of the universe, and his journey in a new world much changed after his escape from a long imprisonment.

Multiple spinoffs were created based on Sandman, the prominent of which was Lucifer. The latter has now been adapted into a TV series which although altered from its source material in the same way iZombie was, is still a decent and highly-recommended watch.

Fable is one of the longest-running and best-selling titles in the Vertigo lineup, and for good reason. After more than 110 series from 2002 to 2015 and countless spinoffs, the mythology of Fable is as deep and rich as any other universe in literature and comics, winning over a whopping 14 Eisner Awards across its run.

The premise is so simple yet extremely brilliant, as it features various characters we know and love from fairy tales and folklore in a modern and contemporary setting. It asks the question of what if fairy tale characters are living amongst us in secret.

Telltale Games’ The Wolf Among Us acts as a prequel to the Fable universe and remains one of the best interactive narrative adventure games ever made. If you like narrative-heavy games, do yourself a favour and pick up this game, before proceeding to check out the source material.

The chain-smoking British master of the dark arts (Hellblazer protagonist) John Constantine is already a popular character in pop culture, having featured in 2005’s Constantine starring Keanu Reeves and in his own TV series starring born-for-the-role Welsh actor Matt Ryan.

Before Preacher came along, Garth Ennis made his mark by featuring supernatural and religious themes in Hellblazer, as John Constantine tricks and lies his way through scores of demons and satanic beings.

Hellblazer had social commentary, as well as horror and fantasy elements. Although he’s now permanently inducted into the mainstream DC universe, Constantine continues to be the same old magician/detective who is charming yet destructive to everyone around him.

There you go, folks, There were many more iconic titles published by Vertigo Comics in its almost three-decade lifespan. Let us know what your favourite Vertigo title was in the comments below.

We're Getting A New Streets Of Rage; Here's What We Want In The Final Game