The official Final Fantasy site has published a first in a three-volume series of Final Fantasy IX interviews in celebration of the game’s 20th anniversary. Because everyone seems to love FFIX due to its nostalgia-inducing ways and loveable charm.

Here are some things you didn’t know about the game, at least from the perspective and answers from the game’s event designer and scenario writer Kazuhiko Aoki. We’ll be sure to update this feature once we get the answers from upcoming interviewees Toshiyuki Itahana (artist) and Hiroyuki Ito (director).

…on a technicality because he wished he could have developed how Zidane is afflicted by the differences in social statuses between him and Garnet a little more. If you care enough for a fictional character you create that you wanted to add more “director’s cut” content to his already-meaty story arc, you know he/she is your favourite.

Aoki said the cutscene-making team of FFIX had a hard time making use of the tech they had on Final Fantasy VIII and its realistically-proportioned characters. It was a lot of trial and error, all things said.

“The characters inÂ Final Fantasy IXÂ excel at showing a certain sweetness or silliness, but even when they take on a totally different serious tone their expressions are so genuine. I feel thatÂ Final Fantasy IX had quite a good balance going in that sense.”

The FFIX heroes do not do a victory pose when you win against the black mages of Cleyra, because it wouldn’t be appropriate for the scene and mood the battles take place in. “You grow used to the characters celebrating when they win a battle, so I was really surprised the first time I saw that.”

It would be inappropriate to celebrate your victory while the game’s equivalent of race genocide out of desperation and control is happening, right?

There was a lot of thought and effort in the Chocobo Hot and Cold minigame.

“[The game] came from the director wanting some contents that would allow traveling all over the game world,” said Aoki. “The concept came together in less than 30 minutes, but the actual creators who worked on the mini-game put a lot of time into it. Every last detail was done with such care.”

If you weren’t a fan of it, we hope this quote made you feel bad for skipping it the first time around.

FFIX’s touch-ups mostly involved reducing the data the game needed to run on public SKUs of the PS1. “We had data increasing every day,” said Aoki, “having to think about where to divide the story so weâ€™d end up with an amount that fit on each of the four discs.

The chocobo below is named after FF’s first chocobo name: Boco. 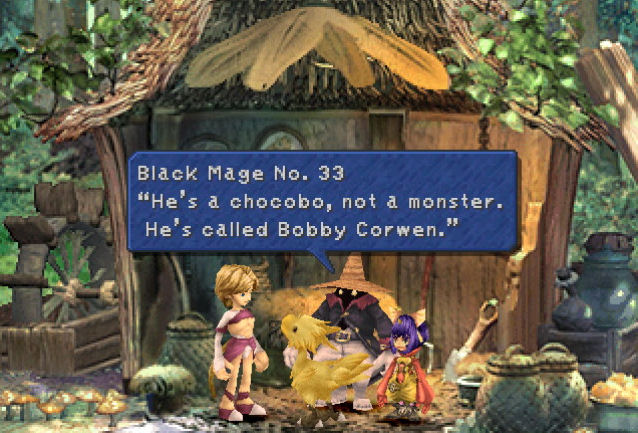 Not exactly rocket science, but it’s nice to know.

Feature
The Fights Of Final Fantasy & How They Evolved

Need a quick summary of how Final Fantasy's combat has evolved from turn-based to menu-heavy real-time battle? This video will give you a rundown from...

News
Windjammers 2 Is Playable From Now-ish Until 22nd June

If you thought the era of extreme 1v1 arcade competitive sports is over, you clearly haven't been paying attention to Windjammers 2. Thankfully, you c...