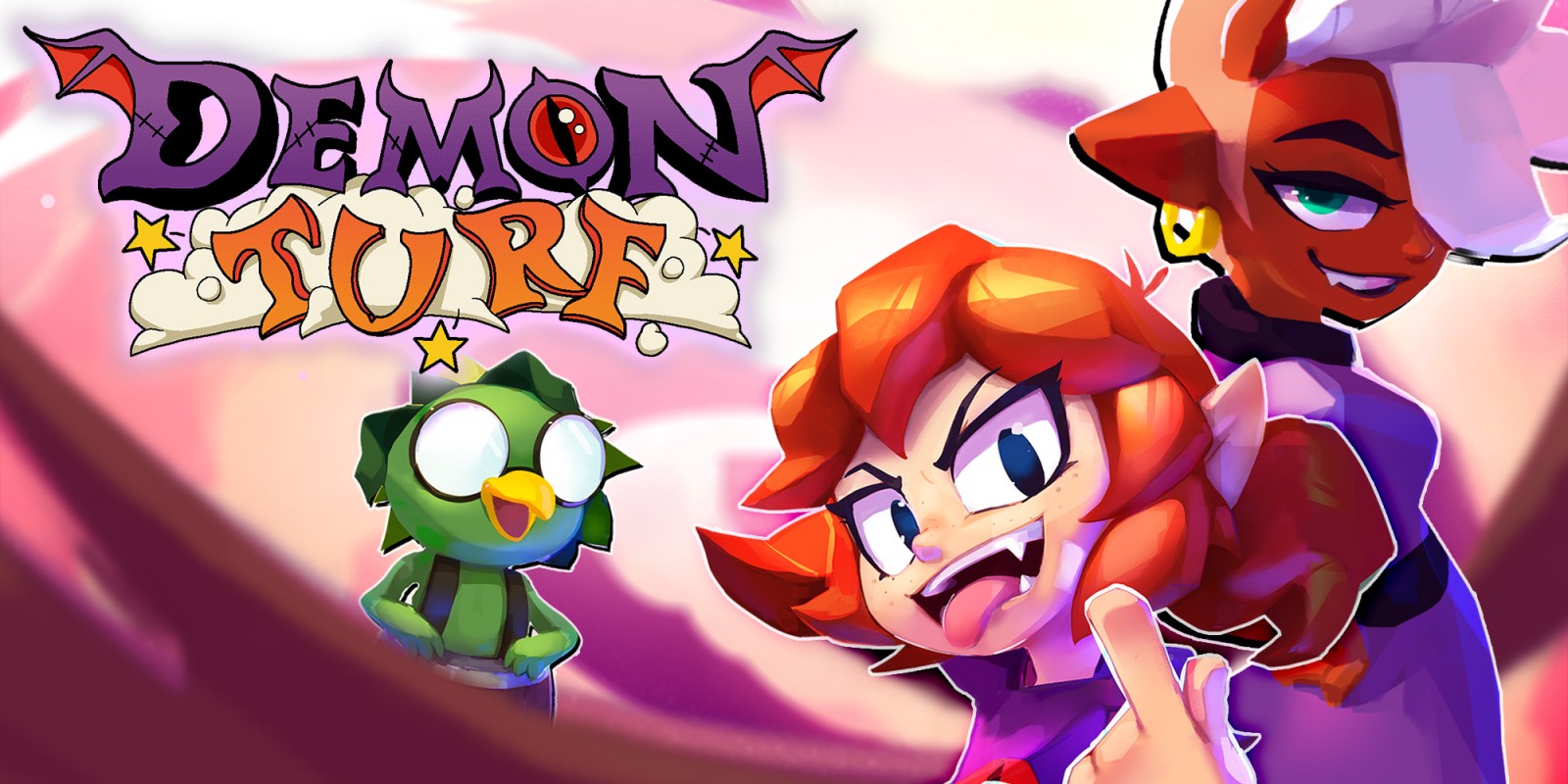 The 3D platformer genre has seen some resurgence of sorts with titles like Psychonauts 2 taking the crown. So is there a place for an indie throwback like Demon Turf? Definitely! Especially with its innovative-but-soon-to-be-stolen-by-other-developers checkpoint system.

In this colourful and cartoony 3D platformer, you play the role of Beebz who plans to take down the Demon King with her plucky attitude and her elite jumping and platforming skills. Along the way, she’ll be traversing various demon planes be it in a dank desert, a city, or even the obligatory ice level. Yeah, it’s that kind of platformer that has to hit all the elements despite being set in an underworld.

The world of Demon Turf is pretty esoteric, from its 3D landscape meshed with its 2D animation and graphic style to its cast of demons who are living it up in the game’s fantastical locations. Thankfully it’s not just window dressing, as the game’s 3D levels ramp up in challenge, starting off easy in World 1’s Apocadesert and then throwing a ton of curveballs in World 3’s Neo City level and World 4’s obligatory ice stage.

Beebz herself is pretty awesome to control; she can jump, double jump, spin in her demon form, swim fast in her aqua demon form, and can acquire different powerups from the game’s four main bosses in each of the four realms. With the exception of the later ones, they’re quite fun to use and help keep things interesting for the platforming and skill-based segments. One moment, you’re racing on a road in your “snake ouroboros” form, the next you’re hooking onto multiple grappling points after jumping off the ramp. There will be many bits in the game where you need to chain moves and deft jumping skills to get through most of Demon Turf’s puzzles and challenges.

Speaking of conflict, Beebz can’t outright kill things, but she can push them with her projectile fist attacks. There will be combat arena segments where you need to push enemies into red spikes and obstacles; these take some time getting used to but once you figure out Beebz’ charge timings and how effective her “ora ora” punch powers can get, you’ll master these bouts after a few deaths. Yes, you will die a lot of times in Demon Turf; the challenge here will ramp up and demand quite a bit from you.

However, here lies the best bit that alleviates the stress from the genre: the custom checkpoint system. You have up to three checkpoints that you can place anywhere that’s safe on the level you’re in -or four if you can afford the mod from the game’s hub. It’s up to you where you want to put it. The first world will have your koppa demon pal Midgi showing the best spots to put checkpoints at, but after that, you have to figure that out on your own.

While that’s all well and good, most players may not know when’s the best spot to put a checkpoint as they’ll be playing through a stage the first time. Honestly, that’s on them and you; if you feel like a stage may have a bunch of hazards you are bad at avoiding, just place the checkpoint. There’s no lives system in the game, so if you die, you just start either at the last checkpoint or at the beginning.

Yes, there are a number of times where I forget to place the checkpoints and end up restarting tough segments from scratch, but again that’s not the game’s fault as it has reminded players time and again about this system. Plus, you can instantly teleport to any checkpoint you created if you’re stuck or if you mistimed a jump and end up at the bottom of the peak. The best thing about this manual checkpoint system? If you complete a puzzle, and you die right after that’s sorted, the checkpoint won’t reset your progress of that puzzle/arena battle/small section, so you can continue onward without redoing it. Very cool!

With you having to deal with 36 stages and their “remixed” versions to get the majority of the batteries needed for the final showdown, as well as epic boss fights that require brains and pattern recognition to solve, you’ll have a ball of a time and almost none of the hassle that’s associated with the genre. Demon TurfÂ succeeds at being old-school without relying too much on old-school nonsense. Having said that, there were a few segments where the game gets a bit cheap and requires way too precise timing for its platforming segments.

Though to be fair, that’s only in the last half of the game, and it’s not like these stages take more than 20 minutes to complete anyway. I will say this: the game’s gliding and time-altering powerup has some wonky physics and mechanics that don’t give players enough time and space to master thoroughly. I felt more comfortable sticking with Beebz’s spin, hovering, grapple hook, and ouroboros form to get through the majority of the title.

Again, Demon Turf’s art style and graphics mask a deceptive, tough, tricky, and challenging platformer that offers bouts of fun, for about 8 to 10 hours tops, with more time needed to get 100% via Time Trials, photo ops, and cake/lollipop collection. But that’s only if you’re a connoisseur of such retro gems. This game will not change your mind about the genre and its foibles, even with its innovative checkpoint system and fun factor.

What The Golf? Makes You Appreciate The Insanity Of Indie Games, Not So Much Golf