Prey is a prequel set in the Predator franchise, and it’s coming to Disney+ Hotstar Malaysia on 5 August 2022.

Set in the Comanche Nation 300 years ago, Prey is the story of a young woman, Naru, a fierce and highly skilled warrior. She has been raised in the shadow of some of the most legendary hunters who roam the Great Plains, so when danger threatens her camp, she sets out to protect her people.

The prey she stalks, and ultimately confronts, turns out to be a highly evolved alien predator with a technically advanced arsenal, resulting in a vicious and terrifying showdown between the two adversaries.

With director Dan Trachtenberg at the helm, indigenous actor Amber Midthunder stars as the film’s hero, Naru, a warrior who protects her tribe from the otherworldly threat. The cast also includes Dakota Beavers, Stormee Kipp, Dane DiLiegro, and Stefany Mathias.

Courtesy of Disney+ Hotstar, we were given the opportunity to interview director Dan Trachtenberg and producer Jhane Myers. Dan Trachtenberg is best known for directing 2016’s 10 Cloverfield Lane, as well as an episode of The Boys

This interview has been edited for clarity. Stay tuned for the video version of this interview and the review of the movie. In the meantime, director Dan Trachtenberg recently revealed how he came up with the title of the movie during our coverage of the movie’s press conference.

Dan Trachtenberg: No. I thought about it, though. I did think, it would be really cool if there was some allusion just for the die-hards fans to recognize, “oh my god, they did that!”. But unfortunately, it was just not that cool (laughs). I just couldn’t make it work.

You know, a lot of hard work went into collaborating with the people over at ADI (Amalgamated Dynamics, Inc.) headed by Alec Gillis and Tom Woodruff Jr. who are just the greatest special effects creatures artists and their teams over there are incredible.

We spent a long time iterating on striking a balance between something that could feel undeniably Predator but also feel new and fresh and far more creature-like and alien and ferocious and be exciting even for die-hard fans of the franchise. 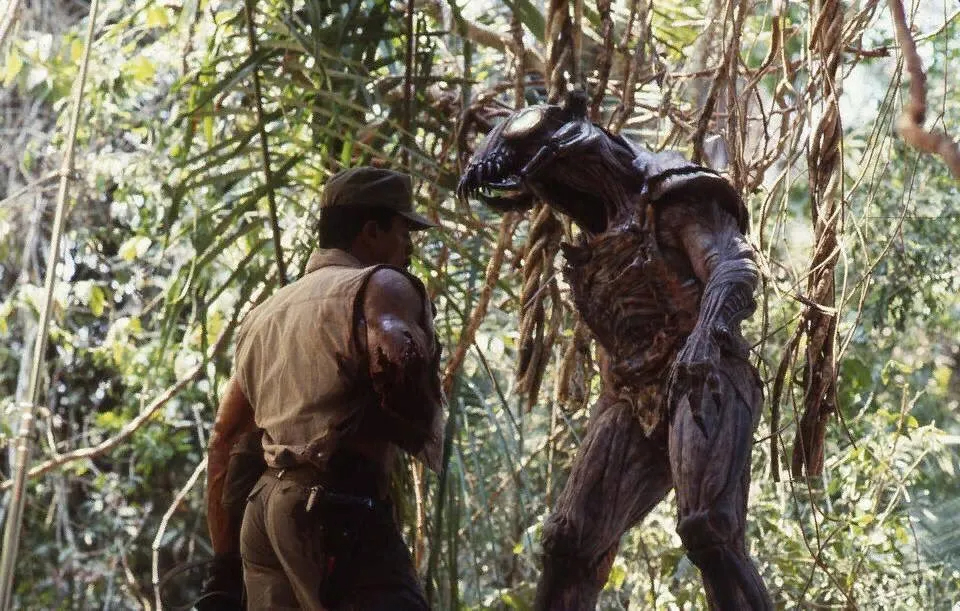 This is what the original but unused version of Jean-Claude Van Damme’s Predator design looked like.

Was there anything you wanted to do in Prey but couldn’t because of any particular reason?

Dan Trachtenberg: No, I really have my own internal compass, my own inner child that was excited to see certain things and wrestling with what would be going too far, what would feel like that does not feel like it’s a part of the franchise, or that’s different but still a part of what I think is a Predator movie.

When I watched the screener for Prey, there were scenes where the parts in Comanche weren’t translated. will the full Comanche dub be fully subtitled or translated?

Dan Trachtenberg: That’s up to the viewer, I think. The viewer can decide the language to be any, including Comanche and can turn on subtitles in their native language or not. I believe, in all versions, just like the version you watched, there will be no subtitles for when the French fur trappers show up.

Jhane Myers: It wasn’t so much a challenge. It was incredible that we got to make this, so I just wanted to make it as authentic as possible to my culture, which is the Comanche Nation. So, i didn’t really think it was a challenge but it was exciting.

News
This Is How Fast The PlayStation 5 Is, According To This First Look

Do you guys still remember what Sony's Mark Cerny revealed a month ago about the upcoming PlayStation 5 storage? He said it will be a specialised stor...

As Disney released the final trailer for Star Wars Episode IX: The Rise Of Skywalker earlier today, tickets for the upcoming movie also went on sale i...