Imagine a post-apocalyptic search action game with Celeste-style platforming. That’s Kandria, an indie passion project made by just less than 5 people who make up Shirakumo Games. And based on how it moves, sounds, and plays, it certainly shows that its makers really love their Nier Automatas.

It Came From The Desert 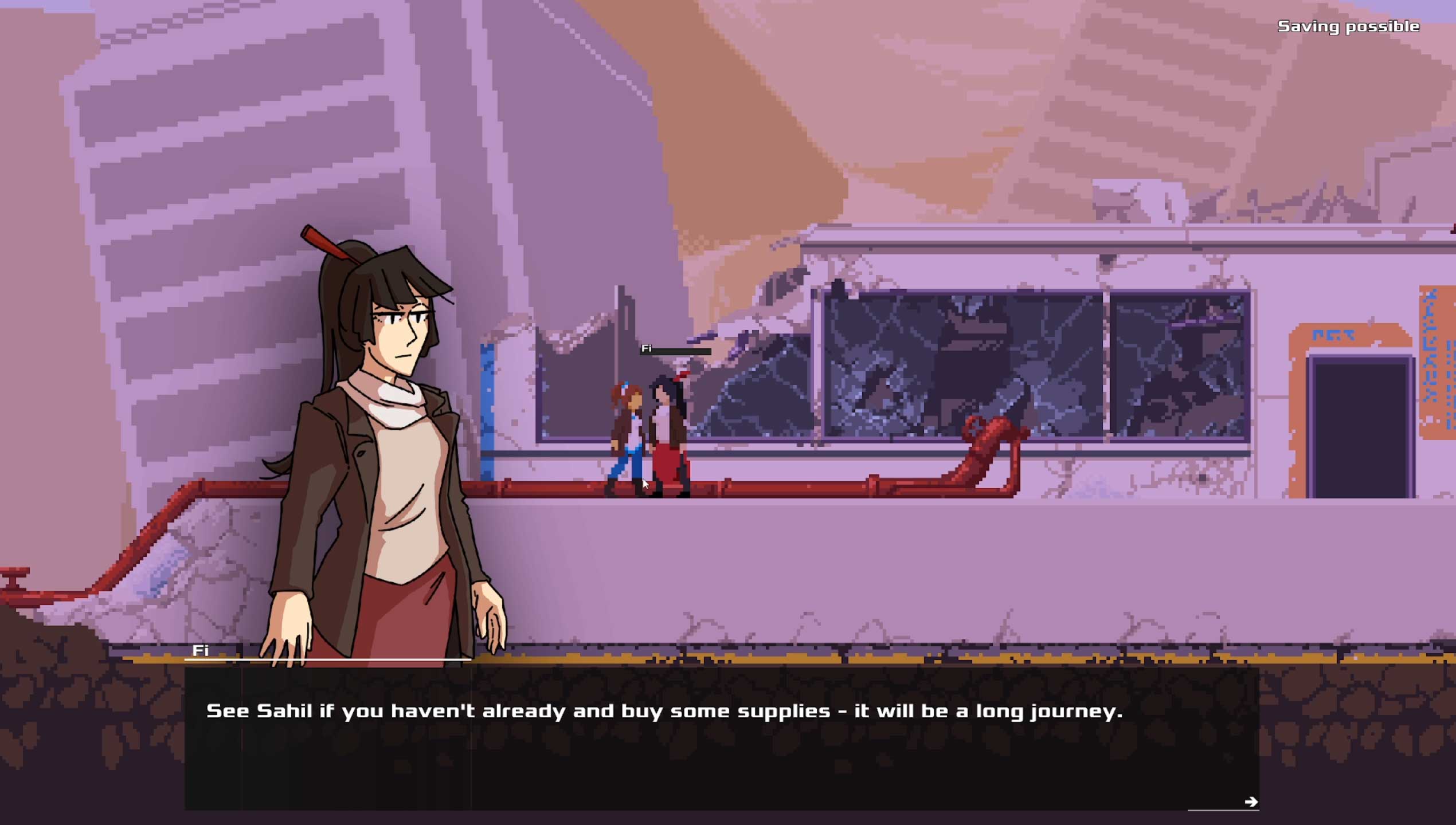 You control an android named Stranger who has been awakened by a bunch of nomads, specifically an engineer named Catherine. As you grow acclimatized to your wasteland surroundings, you end up being a gopher-bot for the game’s few factions underground, helping them out with menial tasks as you spelunk your way down and forward the story about survival in a post-apocalyptic universe.

Stranger the android plays and controls really well in Kandria: she can run fast, climb walls (but with a stamina meter; goddamn Breath of the Wild mechanic), air dash in any direction, and has light and heavy sword/axe attacks all available from the get-go. You’re given free reign on how you tackle missions and which areas you explore: nothing is gated from the start. If you want to check out what’s east and underground, you can do so.

Just be prepared to work a little harder if you’re planning to climb back up. A number of pitfalls and platforming bits in Kandria can get tough; it’s about the same level as Celeste in terms of difficulty. It can take you a while to figure it out, but they’re solvable once you figure out how some platforming mechanics work. You have wind gusts that blow you in one direction further than usual, “crystal” bits that refills your air dash so you can dash again, and platforms that can launch you upward if you jump at the right time. You’ll have a blast jumping and dashing all across Kandria’s underground ruins and landscapes. 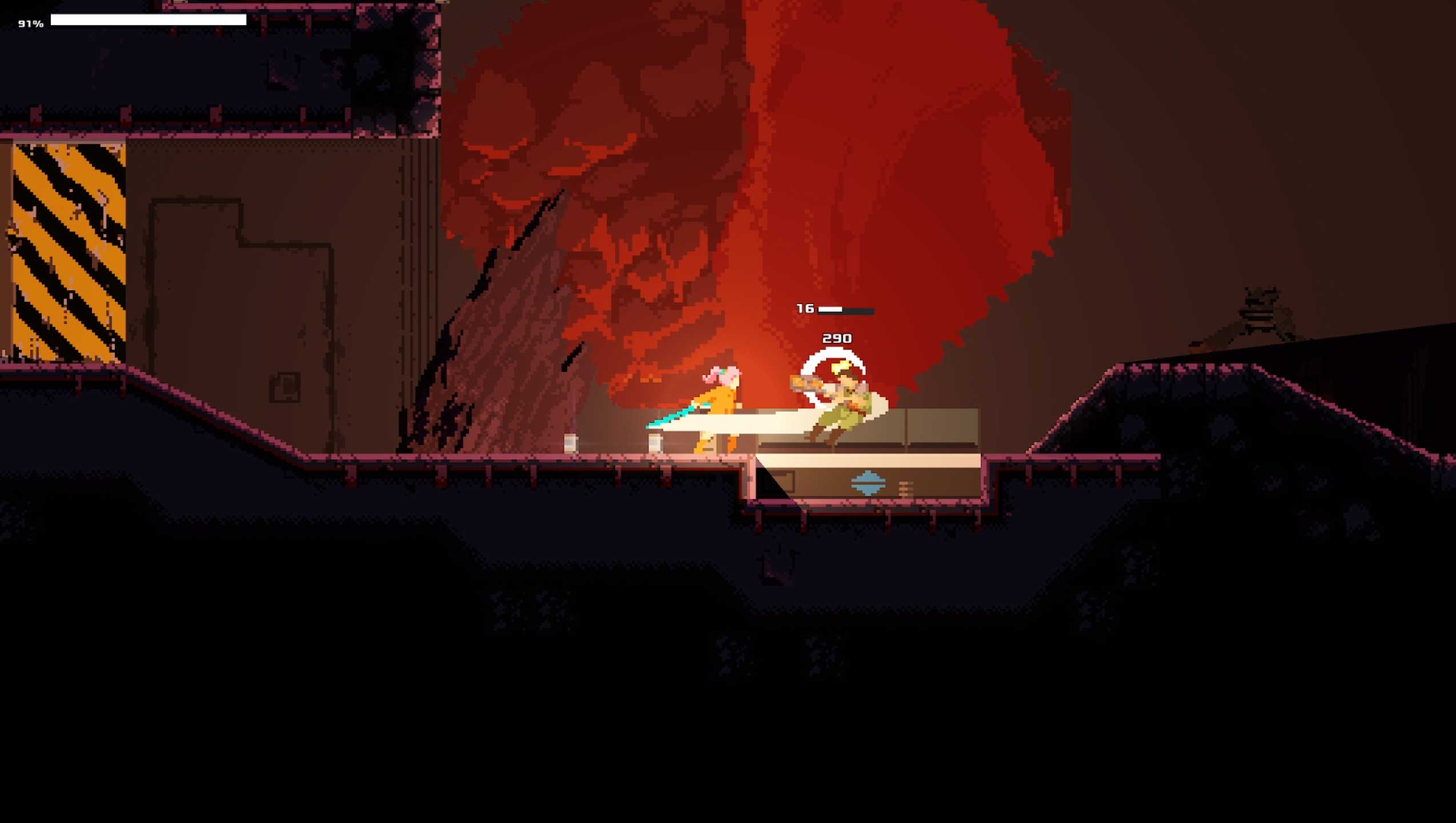 What you arguably won’t enjoy is the combat, provided you’re looking for a challenge that’s equal to the traversing. Don’t get me wrong: the attacks and combat controls are fine and seamless. Apart from the light and heavy attacks, you also have launchers, air attacks, and even a dodge-and-counterattack animation move that’s pretty strong.

Unfortunately, the enemies you fight are pushovers since the first and third hit of your forward light attacks will knock them down on their feet without fail, making them susceptible to your follow-up combos. You will fight big mechas later in the game, but those are few and far between, and they’re also pushovers once you figured out their attack patterns in a minute or two. Perhaps a future update for Kandria means better combat trials and enemies that can withstand certain hits to a point, as well as a few complex strings and patterns.

Other than that, it’s hard to fault an ambitious search action game where all your traversal and platforming tools are unlocked from the get-go, cutting out all tedious backtracking. One that’s made with less than 5 people to boot! Do give Kandria a shot if you want a pretty-looking pixel-art Metroidvania-like title.

News
That Among Us Game Is Super Popular At The Moment, Huh?

Just like Fall Guys did, indie game Among Us has exploded in popularity. Except the latter is 2 years old, so it doesn't really count as a game made t...

News
The Callisto Protocol Goes Gold Ahead Of December Release

Developer Striking Distance Studios has announced that The Callisto Protocol has gone gold ahead of its slated 2 December 2022. Going gold means that ...

Platform: PC Genre: Isometric 70s sci-fi RPG I would say that I miss isometric CRPGs, but the Wasteland trilogy of games and the Pillars of Eterni...