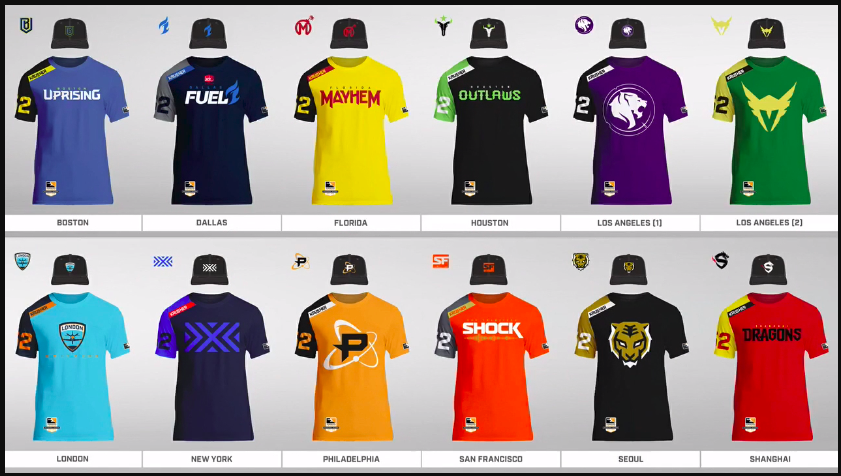 The official store for the Overwatch League opens in a few days, just in time with the pre-season and today we are going to share our thoughts on the pro players’ jerseys you might wanna consider getting cuz they are oh-so-cool. While we haven’t seen the actual product, we’ve spotted some players looking slick wearing their respective jerseys in the wild, most notably during the players’ summit which took place late last week. And yes – each players will wear a specific number throughout the season – just like in other pro sports. So without further ado, here are five jerseys you’d wanna get once the Overwatch League kicks off.

The best Ana player in the world’s name on your back with number 14. It does not get any cooler than that. The all-black with gold sleeved Dynasty kit sits right on top of our Overwatch Jersey rankings and Ryujehong just rolls off the tongue – don’t you think? With minimal text save for the players’ name, this design proves that simplicity works when it comes to designing team shirts.

The star from the recent Overwatch World Cup, SBB is the no doubt the headliner for NYXL at least tilÂ Fl0w3R is cleared to play. The main DPS for the team, expect to see his name appear in many highlight reels in the upcoming months. But damn the team logo is ugly.

Nothing represents an esports team jersey more than a nonsensical, mixed-capped name with a #13 printed on a garish orange and black jersey and this is essentially what the best Genji in the world’s jersey is all about. While the orange and black might not appeal to many at first, it does grow on you and stands out from the other teams in the league.

’23’ is synonymous with greatness – Think about it. Jordan, LeBron …Beckham. Also Seagull is easily one of the most liked and most famous Overwatch player in the league which mean it is a no brainer for one to support him and the Dallas Fuel. The Jack in the Box sponsorship might turn off a few folks thought.

5. London Spitfire – Any player – Home AND Away Jerseys (OK perhaps we should change the title to six)

Never in a thousand years we thought we’d think the color cyan look good on anything – til we saw London Spitfire’s official team jersey. Not only does it stand out from the conventional primary and secondary colors used by other teams, it also bears the coolest logo in all of Overwatch League smack in the middle. Just look at them:

To be frank, we think that combination of white, orange and cyan may be the most inspired design in esports jersey history. At time of writing, the official player numbers for Spitfire hasn’t been released yet but if it was up to us, we’d have ‘Rascal’ printed on.

Also, like other team jerseys, it would be cool as well if they allow buyers to customize these jerseys to their own names. Fingers crossed.

Which of these jerseys is your favorite? Intend on getting one but unsure of the quality? Fret not. We would most probably get hold of Ryujehong’s and Seagull’s once the store opens and will review them accordingly. Stay tuned.