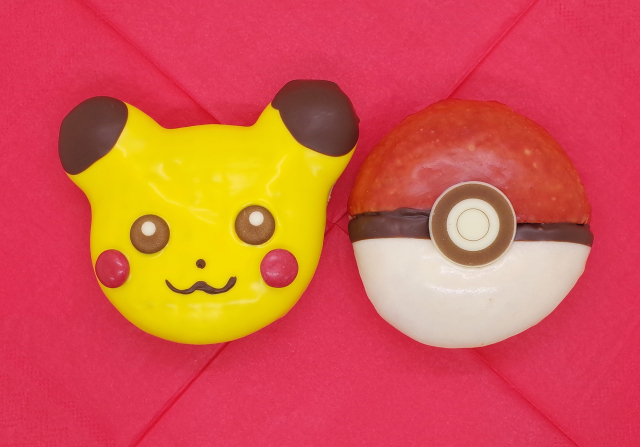 If you’re a fan of Nintendo’s family-friendly imaginary monster cockfighting RPG series, you don’t need a reminder that the Nintendo Switch PokÃ©mon Let’s Go game will be out this Friday worldwide. However, if you happen to be in Japan, you may want to check out this ongoing Mr. Donut promotion featuring, you guessed it, PokÃ©mon-shaped donuts.

This is a cute and tasty marketing attempt at promoting the upcoming Switch game.Â Go nuts at these firsthand pics of these limited edition doughnuts that are shaped after the series’ iconic PokÃ©balls and the yellow mascot Pikachu who also moonlights as a detectiveÂ (via Soranews 24).

Exhibit #A: Pikachu donut here is covered in a yellow banana-flavoured chocolate with chocolate embellishments on its ears, cheeks, and eyes.

Exhibit #B: The PokÃ©ball comes with a white chocolate and strawberry glaze. Its centre is a sweet strawberry jam. If you like jam and strawberries, this one’s for you.

Exhibit #C: the Pikachu-shaped sugar donut is just fluffy and filled with white cream not unlike Beard Papa’s special brand of pastries.

The takeout/bungkus set costs a bit more. For 1,080 yen/RM39.74, you’ll get two doughnuts plus, an extra PokÃ©mon doughnut or two Christmas doughnuts, one mug, and an original takeout box in the design of a PokÃ©ball.

How long will this offer last? It’ll go on from 17th November to 25th December. So if you have a sweet tooth, love Pokemon, and happen to be in Japan next week until Christmas week, best you forgo your diet plans and load up on some doughy nutty goodness!

by Inside A Japanese Post Office – Ten Minute Tokyo in June 22, 2020
Reply

[…] Check Out These Japan-Only PokÃ©mon Donuts […]