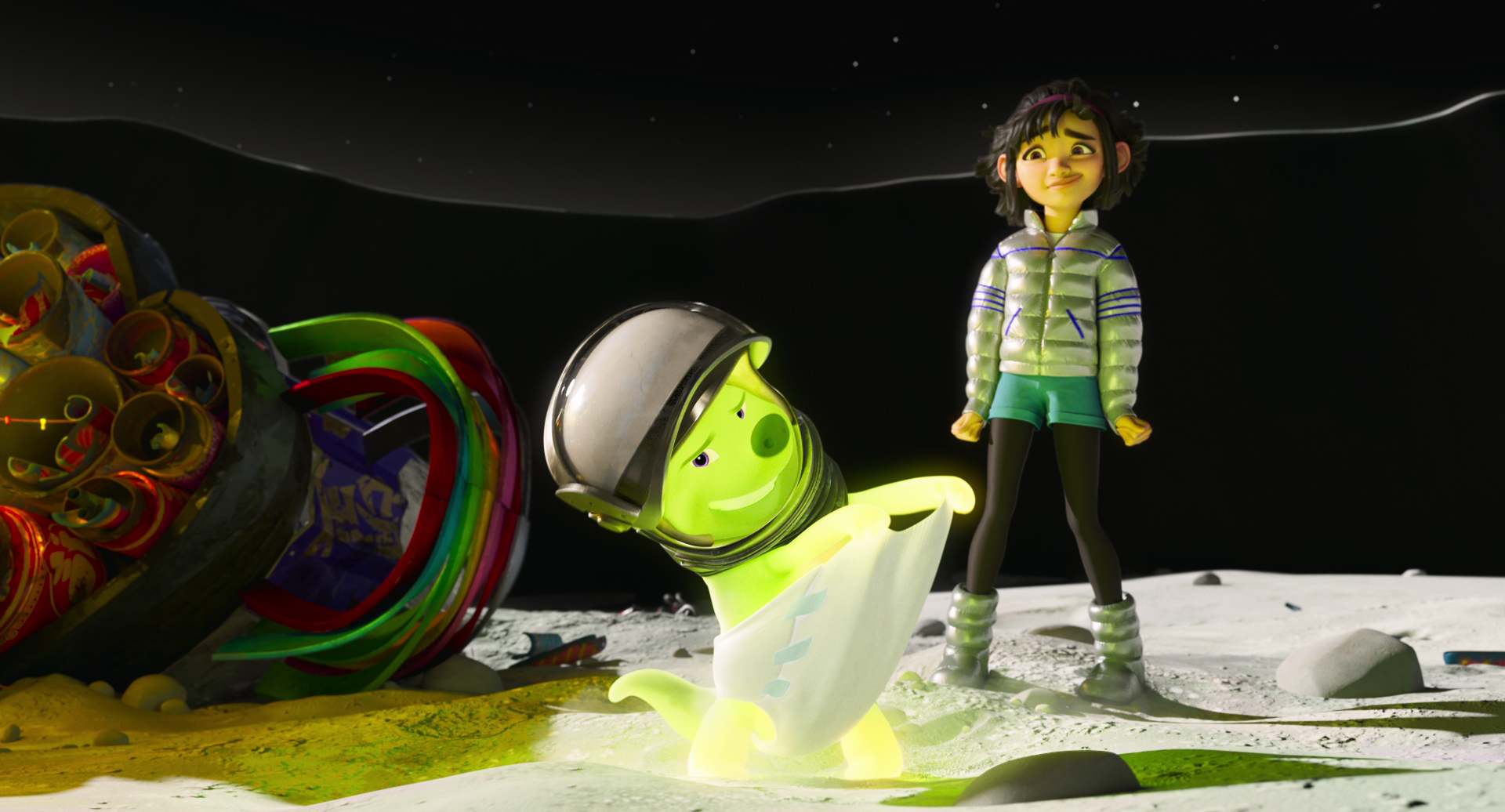 2020 hasn’t been a good year for movies; even animated ones. Disney won’t even be releasing a single animated movie this year. While we’ve only seen one from Pixar so far (Onward) and other from DreamWorks Animation, both of which were mediocre or just okay at best. At least for me.

In comes legendary animator Glen Keane (best known for some of the best Disney classics, like The Little Mermaid, Aladdin, Pocahontas, Tarzan, Beauty And The Beast, and Tangled) and Chinaâ€™s Pearl Studios (best known for… 2019’s Abominable, which was their first-ever feature film).

With such a barren landscape for animated movies this year (at least, until Pixar’s Soul comes out this December), Netflix is trying to shoot for the stars (moon?) with Over The Moon. Unfortunately, this movie pretty much misses its trajectory, resulting in another mediocre animated movie to fill out 2020.

Fei Fei (Cathy Ang) is the protagonist of Over The Moon. We’re introduced to her life with her parents, Ma Ma (Ruthie Ann Miles) and Ba Ba (John Cho), who sell mooncakes for a living. We’re treated to an Up-like montage before tragedy strikes with the death of Ma Ma.

Four years later, life goes on, but Fei Fei finds her life in the midst of great change when her Ba Ba invites Mrs Zhong (Sandra Oh) and her young son, Chin (Robert G Chiu), into their lives. When Fei Fei discovers that her Ba Ba plans to remarry with Mrs Zhong, she tries to escape reality by hatching a plot to reach the moon and find Chang’e (Phillipa Soo), a goddess from a folk tale her mother used to tell her.

That’s essentially the entire first 30 minutes of Over The Moon. The one hour or so that follows feels so much like a different movie. Thanks to the trailers for this movie, it’s no secret that Fei Fei does successfully reach the moon and find Chang’e. However, the movie turns into an overly-hectic smorgasbord of visual and musical stimulation from then on.

In Over The Moon, the moon, or Lunaria, is a place filled with cartoony creatures and vibrant colours, so much so that it’s like someone threw up a bucket of technicolour. The problem with this is it all feels so superfluous.

It doesn’t really inspire as much awe as any of the worlds in Pixar’s or Disney’s animated movies, because the world (or the moon) in Over The Moon lacks details or complexity. It just feels like they’re trying to keep the attention of a child for the duration of the movie’s runtime and needed something flashy enough.

Even with all the blobs and real biker chicks (actual anthropomorphic chickens on bikes, get it?), there’s nothing much that distinguishes Over The Moon. The movie even attempts to introduce a lovable mascot halfway through the movie with a dog-like creature named Gobi (Ken Jeong).

Like Frozen‘s Olaf, he’s supposed to be endearing, being all cutesy and making jokes. They even gave him a musical number that’s not half as memorable as Olaf’s. That’s actually my next major qualm about this movie as a whole.

The music in Over The Moon just aren’t up to par. Viewers should expect a couple of songs in the movie, but some of them are simply plain cringeworthy. Look, I understand that I’m not the target demographic, but if I can enjoy Disney and Pixar movies (not to mention appreciate them), why can’t I do that with Over The Moon?

There are your typical ballads and generic pop tunes in Over The Moon, none of which made me want to check them out after watching the movie or incite much (if any) emotional feelings from me.

There’s even one song where Chin engages in a rap battle of sorts with Chang’e while playing against each other in a kung fu ping pong match.

Kids might lap up all of that, but to me, it felt a little too ridiculous, and not in a sweet way. I was expecting at least one or two good songs from Over The Moon, but it looks like I’ll have to go back to the classics to get my fix. It’s really sad that not even the incredible singing prowess of Phillipa Soo (of Broadway’s Hamilton fame) could salvage the songs.

Of Mooncakes And Loss

The main theme in Over The Moon just feels too familiar for it to have much of an impact on older viewers. We’re used to main characters losing their loved ones, from Bambi and The Fox And The Hound to Up and Coco. Those movies were and still are, a lot more emotionally-devastating.

Over The Moon wants to teach children how to confront grief and process the loss of a loved one. Not only that but how losing a person that you love the most could change you and how you could still find love from other sources.

There are several scenes in the movie that did stir up my emotions, but most of that went out the window when the movie chose to bombard me with a rainbow of colours and music instead. Still, this movie’s emotional beats might still resonate with anyone who’s ever lost a loved one. It’s just not as powerful or effective as it might have been.

If Pixar’s Coco and Up are at the very top, then Over The Moon is somewhere on the lower end of that same spectrum. It’s terribly disappointing, especially from a legend like Glen Keane.

Despite everything I’ve said above, Over The Moon still boasts stellar animation, on par with the best of Disney and Pixar. That is, as uninspired and familiar it all feels. Oh, and the Chinese cultural elements don’t do much to elevate this movie above anything.

Should mooncakes, several lines referencing hairy crabs, and speaking bits of Mandarin here and there be praised as a worthy attempt at diversity? I don’t think so.

Netflix’s Over The Moon will ultimately entertain the kids, but it won’t do much for most adults.

Over The Moon is now streaming on Netflix and it’s even available in Malay dub.

A New Dragon Ball Super Movie Is Coming In 2022

House Of The Dragon Gets New Trailer & Character Posters