We know why you clicked on this.

You’re perplexed. Why would, someone who refer themselves as ‘rusty’ would want to play a sweaty, fast-paced, high-octane, frenetic game like Call of Duty. “Do you enjoy pain?” you wonder. “Were you dropped as a child?” another might ask. “Why subject yourself to potential humiliation in the face of late teens and early twenty-somethings who are at their peak reflex and physical prime, while you’re in your mid-thirties?” chimed in another.

Here’s the thing. Sometimes some of us just enjoy mindless FPS games, going against other players instead of just shooting at waves and waves of A.I. Some still get the kick of besting out others regardless of their age and skill level. There’s this satisfaction of out-gunning and outsmarting other players and that joy is amplified when we find out an obvious (another) man-child is the recipient of our calculated moves.

So today, we are going to share with you several tips on how to even the score – or at least, make yourselves much more competitive in public Call of Duty: Black Ops Cold War lobbies. By no means are we pros – however, having managed to hold our own respectably in Call of Duty games over the years, we have several tricks up our sleeves to ensure your KDR stays on the positive, you get kills more than being killed, be the teabagger rather than the teabagee and hopefully, earn those kill or scorestreaks much faster.

Know – and Master – The Weapons

Love it or hate it, meta weapons rule the lobbies. In Black Ops Cold War, the ever-popular MP5 has risen to be THE meta weapon which everyone gravitates towards, adding it into their arsenal and levelling it up to peak performance. The XM4 is another popular choice due to its versatile nature while the AK-47 is a staple for those who enjoy going out loud and proud into the battlefield. Understanding the strengths and weaknesses of these weapons, while won’t guarantee anything, ensures that you enter gunfights more equipped and ready to react to situations in a much more efficient manner.

Spot the enemy that’s runnin’ and gunnin’ with the MP5? Instinctively don’t allow them to come near, or avoid any head-on confrontation. Spot a sniper camping out in the back? Then try flanking. Don’t let them tell you otherwise but intelligence is king where everyone else is running about like trigger happy headless chickens.

Consider on getting acquainted with and fully level up these weapons: 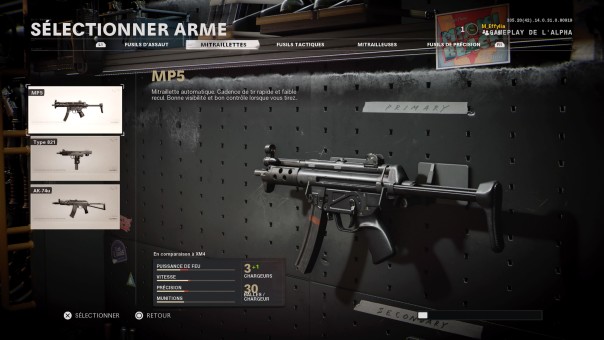 Most noob-friendly weapon. Very forgiving with its high rate of fire and expandable magazine. Focus on silencer and hip fire improving attachments and you’re good to go on a face-to-face rampage. Easy to learn, hard to master. Every CQC aficionado’s best friend. We recommend going with the Law Breaker Wildcard and equipping the following Perks – Ghost; to stay hidden from Spy Planes when moving; Cold Blooded to stay clear from AI and player-controlled scorestreaks which means you won’t be targeted by Sentry Turrets, Cruise Missiles or Attack Helicopters; and Ninja. Sprint faster and quieter, and undetectable by Field Mic when on the map. 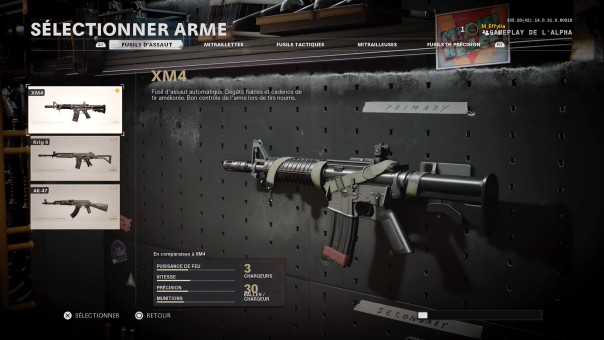 Very versatile weapon to suit any type of medium engagement, be it harassment, locking out a particular hall/ alleyway or if you’re confident enough, mid to long-range battles. Focus on maximizing the bullet velocity so your XM4 turns into a beaming machine and to ensure a tight spread of your bullets, go for attachments that reduce vertical and horizontal recoil. 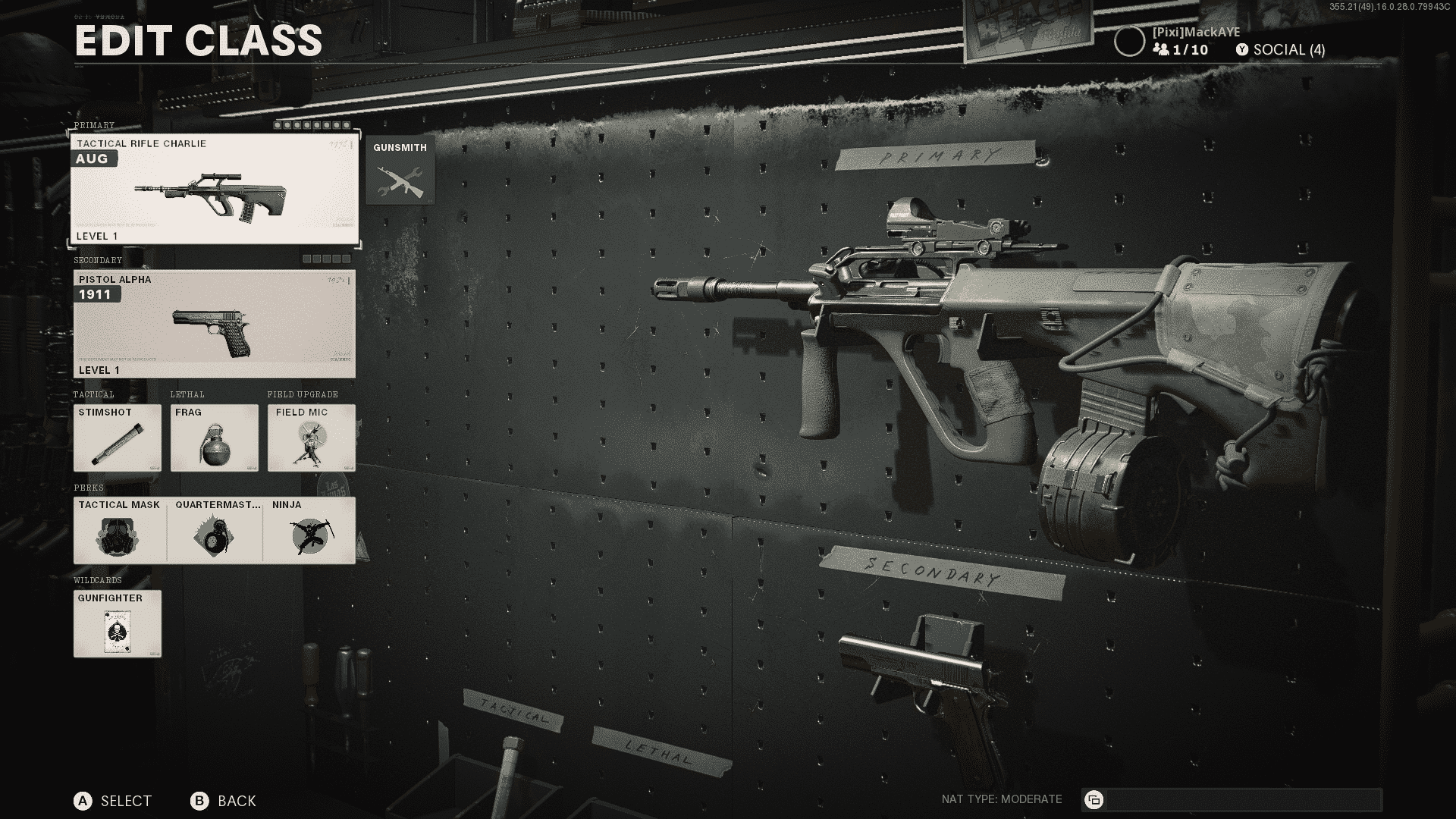 Now hear us out. While tactical rifles aren’t as sexy as SMGs and ARs, they do excel in long-range engagements. Think of a more accurate AR or rapid-firing sniper.

The AUG is our favourite due to several reasons. The AUG has;

The three-round bursts which come standard with this gun may appear like a crutch for up-close battles, but it is never its intended use. The AUG is a brilliant mid to long-range duelling weapon mostly due to its very controllable recoil. Equipping it with bullet velocity improving and recoil control attachments makes this the king of mid-range automatic weapon battles.

We won’t touch the snipers as those are super high skilled level weapons. Only consider using snipers once you’ve mastered positioning, is very comfortable with your aiming ‘snappiness’ and have a penchant for self-torture.

Accept Your Shortcomings and Weaknesses

Everyone loves to quickscope or do a triple kill move into a crowded room. We dream of pulling off a 360-no scope sniper shot but let’s be real. Not all of us are as gifted as Shroud or FazeJev or have the reflex of a teenager chugging G-Fuel. Most don’t have the ability to snap our crosshairs to three stationary targets’ heads – let alone moving ones.

We tried – believe us – to play like the guys we saw in CDL. Why not, right? It’s always exciting to feel like a super-soldier just mowing through hapless opponents with your SMG and shotgun combo or God forbid, akimbo pistols. But truth is, unless this has always been your playstyle since the CoD 4 days, you’re in on a hard time adjusting to this demanding playstyle.

If you’re pushing 30 or in our case, our mid-30s, reflex is in the negative end of the spectrum so unless you are a masochist, we do not recommend pulling off a Leroy Jenkins.

Following and adding up on the last two points mentioned, once you know, or at least are able to anticipate what the rest of the lobby are doing, play accordingly to nullify, complement and counter it. If your teammates all rush down the right, maybe holding down that left lane might be a good idea in case some enemies are trying to flank.

Don’t bother with jumping into the fray, attempting to snag a kill or two. You won’t. Even if you are able to, the effort isn’t worth the trouble. You’ll end up dying more and at that, become a crutch for your team. Remember. Not getting killed is as important as getting kills.

It also helps if you are able to think like an SMG bum-rusher who have very little sense of self-preservation. What would we do? Will we peak from this angle, or come barging through that door? If you notice your opponents tend to rush, then set traps or ambush points along chokepoints. Equipping yourselves with stun or smoke grenades will decrease the enemies’ effectiveness, greatly improving your chances of survival.

SMGs will always lose out to assault rifles in medium-ranged gunfights so perhaps focusing on levelling up your XM4 or AK-47 might be a good move too. Say you’re an SMG gremlin. Your shaky aim does not allow you to aim at anything beyond 40 meters or so. So what do you do?

You master the map, and you have the advantage against whoever you are fighting against. By understanding how matches tend to flow, the rotations and spawn points, you’ll be able to take advantage of blind spots and capture the enemies in their most vulnerable positions. For example, helping your team on Hardpoint isn’t necessarily guarding the point.

You can contribute to it simply by making it harder for the opponents to rotate. Guarding certain lanes either by pre-aiming down the alley or even setting up traps contributes to slowing down and disrupting the enemies during rotation. Those precious seconds spent fighting you means a better chance of your teammates either successfully capturing or defending the next point.

Many might not know this simply due to them opting for Flak Jacket or the Tactical Mask as their first Perk slot but equipping ‘Forward Intel’ grants players not only a larger mini map, it also alerts them when and where enemy reinforcements are arriving from. This helps a ton especially if you want to catch your enemies off a spawn, or choosing which portion of the map to lockdown.

Play It Your Way

Just because everyone is playing with SMGs, it doesn’t mean you should too. If there are several snipers locking down the dunes on Satellite, then maybe flanking them through the crevices and hills would do the trick to catch them out of position.

There’s an argument which goes like – if I don’t use the meta weapon like everyone else, then I’d be f****d. We are of a different school of thought. Let them fight their way. You fight on your own terms. Fundamentally, Call of Duty multiplayer rounds are like rocks-paper-scissors. SMG cancels out anything up close, snipers are kings of long-range while ARs fill the gap in between. Let the fight come to you and react accordingly, rather than YOLO-ing all the time. Unless you are on a reverse-boosting mission. Which means shame on you.

Our skills, rusty. Our reactions, way past optimum. But what we can do to even the score is by using our wits over raw skill and reflex. Even a simple tweak would improve your multiplayer experience and hopefully, your performance across the board. You’ll end up killing more, get stomped more sparingly and most importantly, find some joy in public lobbies.

PlayStation has announced that they have acquired Bungie for a reported US$3.6 billion. The developer is best known for developing the first few Halo ...

Dallas Fuel is a team in crisis. They have the worst public perception in the Overwatch League no thanks to xQc's shenanigans (more recently Taimou) a...

Washington DC's new Overwatch League team has a name and it sounds like it came straight out of a comic book: Washington Justice. Brandishing the colo...