When you boot up Cyber Shadow, its presentation is sleek yet on a vintage level. This is a throwback when games were short but really punishing. A 2D action platformer that separated the chaff from the wheat. A first stage that teaches you the ropes without saying much, and then the next few levels testing your patience, precision, and limits until all bets all off in the final half.

Joy turns to frustrations as you remember why you, as an older gamer in the late 80s and 90s, loved and hated these kinds of games from Strider to the OG flavour Ninja Gaiden (or even the first and third Castlevania to an extent). Because this Yacht Club-published & Mechanical Head-developed retro nod to the hardcore platformers of yore demands the same kind of perfection and precision from you in the majority of its run. Once the training wheels are off, you’ll need to solve your way to get from left to right to reach the checkpoint, lest you start the segment of doom all over again. It’s fast-paced, it’s brutal, and is more than happy to make you its b***ch like a failed late 90s ad campaign.

And you’ll love every minute of it, if you give it a chance.

You play a cyber ninja named Shadow -hence the title- who came back from the dead to avenge his slaughtered ninja clan and help his voluptuous female master. Because it has anime all over its sleek 8-bit coloured cutscenes which are tributes to late 80s games trying to tell a story in the most cinematic way possible at the time. You can’t fault the game for lack of style: it’s dripping with it from its detailed levels to its pixel art animation wonder that’s a sight for sore eyes.

It’s not just the look that will draw you in: it’s the controls, gameplay, and newfangled touches that make it accessible and convenient while retaining its challenge. Unlike its predecessors more than a decade ago, Cyber Shadow doesn’t punish you for not finding the correct items for the correct situation. You actually get them after each major stage and boss. For instance, a downward thrust that lets you “pogo stick” off of airborne enemies in consecutive fashion will be given to you after a few missions in, following which you can revisit previous areas to open up secrets and powerups.

And even if you run out of special energy (the “ninpo points/hearts” of this throwback), you can still use them; they just wouldn’t be as strong or as powered-up when charged with special energy. My personal favourite is the sprint and ninja slash dash move which lets you blink from one side to the next, killing enemies in its path. It does a heckaton of damage when powered-up, and it also gets you to places quick. In fact, some stages require you to use it very often if you want to attempt a no-hit run. 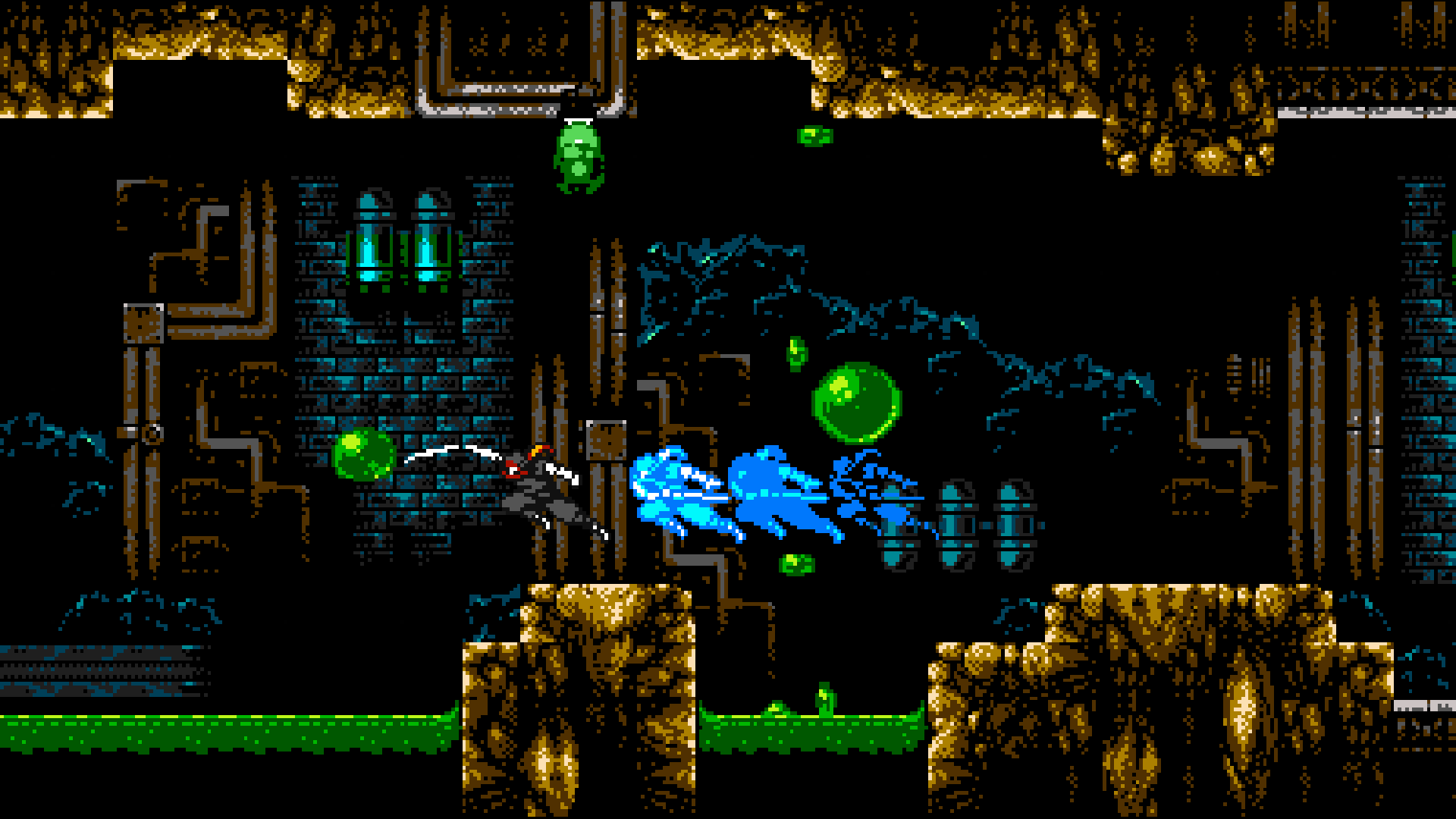 Even if you’re playing it normally and enjoying its pacing, Cyber Shadow is tough. While checkpoints give you chances to stock up on health, special energy, and one special item for a price, the game pulls no punches. Every enemy is out to get you, and they’ll surprise you in the unlikeliest of spots. Flying enemies will home in onto your last known position and will attempt to bump you off ledges so you fall to your death. Platforming can get tricky, especially when there’s an enemy strategically placed in front of your destination to obstruct you.

Traps like moving spikes and crushing walls will require you to memorize their patterns lest you want to go all the way to the last checkpoint. Fortunately, the game does keep track of your progress. If you turned on a gate and suddenly died right after, the game keeps note of that and lets you proceed forward instead of you repeating the arduous steps and fights needed to flip that gate switch.

Conveniences like these do help lessen the frustration; the instant spawn time also helps too and keeps the level’s pace steady. 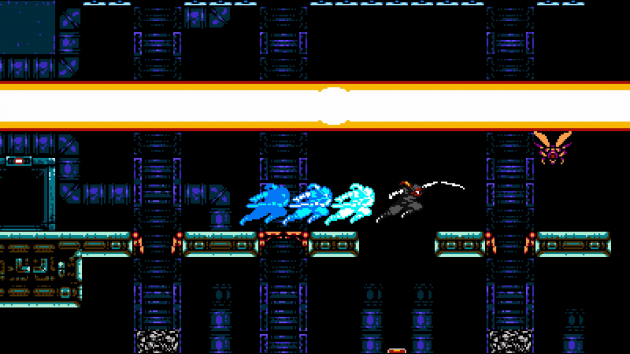 Some chinks still pop up in this ninja armour of a title. You can deflect projectiles, but it requires you to tap forward once on the d-pad when you’re close to an enemy fireball of any size. You are usually in perpetual motion when in Cyber Shadow, and you also have a dash move that can be triggered with two taps of the forward d-pad. If say a couple of them are in your face, there’s a chance you can run into the fireballs accidentally and lose precious health. You also will have to stop your momentum just to tap a button whenever you want to parry.

Whoever thought it was a good idea to put a “tap forward” parry mechanic in a game that’s all about preserving said momentum AND combines it with a dash attack that’s easily trigger-able needs to be flogged. At first, the early bits where you parry projectiles against lone enemies is fine. But in later game situations where you need to preserve life and the timing is so precise? With a ton of enemies like the aforementioned “hawks” homing at you? It gets very frustrating; think Ninja Gaiden “Level 6-2” levels of hell. I get that I should be punished if I missed a jump or missed a cue to dash.

But to also have this counterintuitive parrying mechanic on top of that? Why not just map the parry to a different button, or an input other than “tap forward” which you can accidentally cancel into a dash thanks to its lenient controls? This only works in one-on-one fighting games, not so much on a hardcore 2D platformer where a bazillion things are out to get you every step of the way.

Still, most of Cyber Shadow is good bloody 2D fun. The controls are tight (for most parts), the level design flows just great with shades of its forefathers echoed in every layer and pixel, and the platforming combat mix is brutal yet fair. Again, for the most parts. Yacht Club and Mechanical Head have clearly made a title for acquired tastes, specifically the masochistic kind, but they at least had the decency to be generous with its continue system and new-age game design nuances like refillable energy for your skills. All in all, highly recommended if you think these past few indie games of yesteryear are a bit too tame for your liking.

Politiko is a card game produced by Malaysia-based Centaur Games just before the country's 13th General Election in 2013. Over the years, several impr...

We don't often get local period pieces here in Malaysia, but The Garden of Evening Mists is exactly that; a film adaptation from the 2012 English-lan...

Feature,News,Reviews
My Experience With Xbox PC Game Pass Malaysia: The Good & The Bad

After being sidelined for many years, gamers in Southeast Asia rejoiced last month when Microsoft announced that the Xbox Game Pass, or rather, the Xb...