To my horror, the gamertags at the top right corner of my screen went from green to red in an instant. Both my teammates were down. My partner whom I queued with, the Trickster was felled almost simultaneously, right next to the random drop-in squaddie who, like me, was also a Technomancer.

Unsure whether both were felled due to continuous sniper shots or Moloch’s altered powers, I wasn’t planning on finding out. I weaved, dipped, dived and rolled in between shots and would-be explosion and area of effect in order to revive them. We’ve gone too far to just give up now. I just had to make it.

I went straight for the Trickster whom I know has the ability to generate a time-bending forcefield. He read my mind. Almost instantaneously after being revived, he popped up the forcefield and proceed to revive the third squadmate while I move to a more advantageous position. In an instant, we were back to full power, ready to finish the final leg of the fight.

That was one but a number of crazy boss fights I encountered in Outriders, a shooter developed by Polish studio People Can Fly renowned for several notable classics including Gears of War Judgment and Bulletstorm. From the get-go, you’ll instantly realize that these folks know what they are doing.

Outriders oozes the DNA of games People Can Fly has worked on in the past while also exhibiting traits of other games. It’s one part exploration looter shooter like Destiny 2 and Borderlands 3, one part cover shooter like the aforementioned Gears game, one part shooter mechanics from Titanfall 2 and Apex Legends, and one part character class system ala Diablo series. Does this homunculus work, especially in a world filled with similar games-as-a-service titles that have failed time and again? For the most parts, yes.

Those familiar with Destiny 2 would feel immediately at home with Outriders. In fact, the way the story was written, with subtle tweaks of the storyline here and there, would slot just fine as an unofficial prequel to Destiny. But it isn’t. The story, exploration elements and types of enemies encountered while close enough, still manages to make Outriders a game of its own right.

In Outriders, you play as well, duh, an Outrider. The cream of the crop of the remaining human race’s fighting and security force. OK let’s be real. The writing leaves a lot to be desired but hey, I’m here to make things go “BOOM”. Anyway, serving as what would happen if we don’t change the trajectory we are on right now when it comes to the (mis)handling of this planet, in Outriders, the human race was forced to abandon Earth for the stars.

After eighty years or so in space, the last remaining remnants landed on Enoch, an Earth-like planet which appears to be hospitable enough for Earthlings to resettle. Then shit hits the fan. Long story short, you gained new God-like powers. You, my friend, are now an Altered.

After a pretty meaty intro which was part of the demo, you’re given the choice to choose from four starting classes;

While there are four classes to choose from, the game only allows a squad of three to run around Enoch like headless chickens. So if you plan on teaming up with your mates, heed this advice – select your classes which not only fit your style of play but build them to complement your squadmates’ powers and weapon mods which are bonkers to call them mildly.

In my current build, thanks to the “Shadow Comet” mod, my assault rifle brings down a freaking comet onto the enemy.

With a cooldown of 3 seconds and splash damage that’s scaled to the weapon’s level, this weapon’s devastation is only outrivaled by its sure ridiculousness. And that’s ok: we like ridiculous stuff.

Each class are able to unlock eight different skills but are only able to use three of them at any given time. So until you’ve unlocked all of them and found your perfect setup, expect to spend a ton of staring at the character menu, min-maxing your build whilst keeping an eye out for other numbers such as armour, health, anomaly and firepower. It can be a bit taxing at first, but once you’ve gotten a hang of it, is a breeze to navigate through.

Just like the thumping sound of bullets being spat out of your guns in Gears and Apex, the shooting in Outriders feels punchy, meaty. Each connecting bullet gives that “THUMP THUMP THUMP” feedback that I cannot get enough, making each shot you land matter.

Although the enemies typically utilize the swarm tactic on you, once they identify your tendencies,they switch modes to force you out of your comfort zone. Prefer the Gears-ish shooting from cover method? The AI, which is one of the more impressive ones in recent times, will react in several ways. Suddenly several grenades are being tossed right next to you to flush you out. Or a squad of melee troops flanking from either or both sides. The fact that certain covers are destructible makes the firefights frenetic from start to finish, forcing you to improvise your approach in order to survive.

The main campaign on Outriders should eat up about twenty to thirty hours, depending on the difficulty you are on. Unlike other looter-shooter games where the level of the enemies and tiers of loot scale accordingly with your character’s level of progression, Outriders allow you to tweak them via a “World Tier” slider.

These tiers unlock via an independent scale that progresses concurrently with your character’s XP. Each tier grants several perks in the form of a higher chance of obtaining and the ability to wear Epic and Legendary loot – though at the cost of stronger enemies. For example at world Tier 9, your loot rarity modifier bumps up to 225% alongside a Legendary drop rate modifier bonus of +330%. You are also permitted to equip items six levels above your character’s current level which means if your character is at Level 18, you are allowed to carry items up to Level 24.

However, the tradeoff is this: The enemy levels scale up with your gear as well.

In other games, the tried and tested rule is to switch to the highest available gear. Due to the multiple gear rarities and statistics, it isn’t as straightforward in Outriders. Do you prioritize your health over firepower? Or do you emphasize Anomaly power? And the mods that come with each gear – while can be swapped out, leave at least one locked in making porting your favourite setup to the next higher level gear isn’t as clear cut.

This prompts the exhaustive yet satisfying cycle of disassembling or selling items you don’t need to boost up your gear of choice. Speaking of which, some protips:

#1: Selling items and using the profits to buy Titanium from Bailey seems to be the most effective way to accumulate the rare metal. Especially once you reach level 30.

Post campaign, a new free-world mode opens up called Expeditions where you are able to tackle a more condensed map filled with higher tier enemies. The drops are much better and the maps – 15 overall – are rotated daily. Legendaries are more common in this mode but believe us when we say this – you’ll have to earn them.

#2: A sure-fire way to obtain Legendary items is to complete all the side quests – the side stories, bounties, hunts and even the Historian quests. Completing each of these quests reward you with at least one random Legendary-tier item even before the final boss fight.

For more rare metals and farming tips, head on over to our guide here.

Aesthetics-wise, Outriders is clearly Destiny’s edgier, brooding cousin. Everything is grimmer, rougher and bloodied. Surprisingly though, the colour palette is more extensive thanks to the varying world levels you’re dropped into – from the forests, to the mountains, grimy World War 1-like trenches and to the desert. Each presents a unique set of setting for a unique and distinguishable feel.

Does it make sense if I tell you that the graphics during gameplay is much better than the ones shown during cutscenes? I can’t help but feel that the cutscenes were afterthoughts once the core gameplay was fully developed.

I do appreciate that they match the gear I had on in the cutscenes, though.

As much as I enjoyed Outriders, I will not sugarcoat its rough launch that affected my experience. Although nowhere close to the more recent disasters like Cyberpunk 2077, Outriders‘ problems cannot be ignored. Game-breaking? Heck no. Annoying as hell? You bet.

Playing it on the Xbox Series S, apart from the network-induced troubles, the game ran fine for us, save for quests and navigational bugs. These can be remedied by either opening the menu page and reverting, or simply jumping back to the lobby.

In short, the game could use some extra housekeeping and we foresee these problems sorted in the near future.

Speaking of the Xbox, Outriders was added as a Game Pass free game at launch. A move that may have bumped up the player count tenfold has also become the culprit in overloading the game’s servers. The servers appeared to be buckling due to the immense player count and as a result, I faced countless disconnections and crashes during the first week of launch. To a point, cross-play between console and PC players had to be suspended and at the time of writing, has been resumed thanks to a new patch released by the developers. 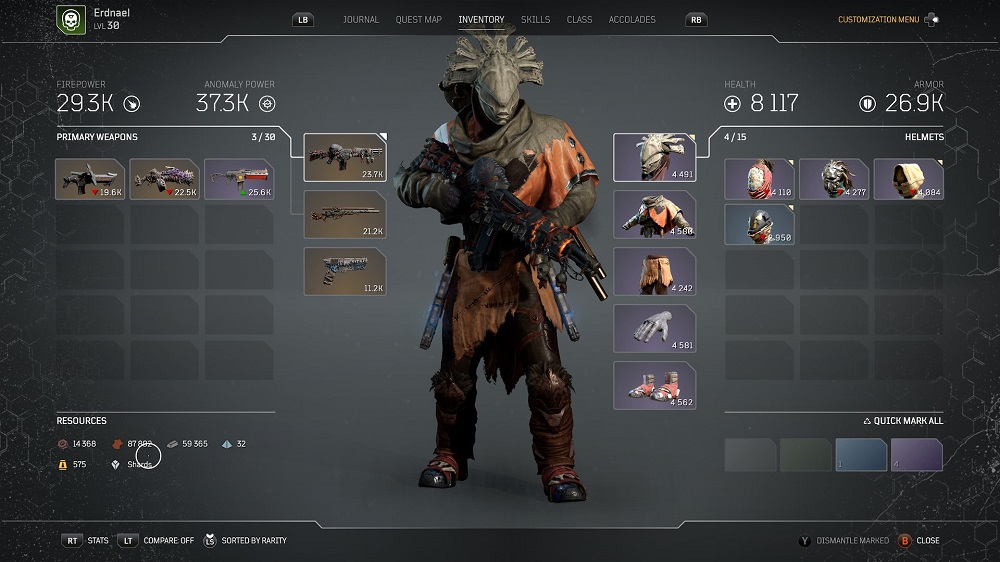 Outriders is a fun, engaging yet flawed game. The devs stuck to their guns and emphasized on their strengths and being true to the name of their studio – it aimed for the sky when producing its own loot-and-shoot action title, yet ultimately brought back down to reality by server issues. But don’t let that dissuade you from trying out the game. Underneath the rough start lies a very promising franchise you should not sleep on.

The fact that it’s got a free demo encompassing the first world and stage boss should allow you to get a better grip of how the game is. All progress carries over to the full game so your effort isn’t in vain.

If you’re on Xbox Game Pass – what do you have to lose? Give it a go and thank us later.

Not to be outdone by Epic Games' Fortnite, the battle royale game that started it all is getting an upcoming worldwide tournament. Because the world n...

The Nier Automata anime has now been officially confirmed. It will be based on the 2017 JRPG of the same name, which was developed by PlatinumGames, Y...

News
The PS5 Backwards Compatibility Dream Is Still On Track

Sony has been pretty tight-lipped on whether the PS5 will have full or partial backwards compatibility for previous generations. However, the company ...