If you like your action games cheaply made and overpriced, look no further than D3 Publisher and developer Shade Inc.’s latest title Samurai Maiden.

The game pits you as a young schoolgirl named Tsumugi who gets warped from her 21st-century trappings into the Sengoku period. She teams up with three ninja females as they help out Nobunaga fight off the undead horde in 24 different stages filled with action and platforming. Along the way, Tsumugi gets to bond with said ninjas: ninja-in-training Iyo who has the same body type as Tsumugi, mechanical arm ninja Hagane with the well-endowed big sister archetype, and haughty fox ninja lady Komimi with the tsundere vibe.

The trio also have their respective elements skills that can help with hindering the opposition: Iyo with fire shurikens and the ability to carry and place items on-stage, Hagane with her Lightning gauntlet and grapple skill to swing to places, and Komimi with her onmyoji Ice hammer magic and her bomb-carrying-and-throwing skills. They don’t do squat unless you command them, which makes them kinda useless if you’re not active with your support and assist buttons. 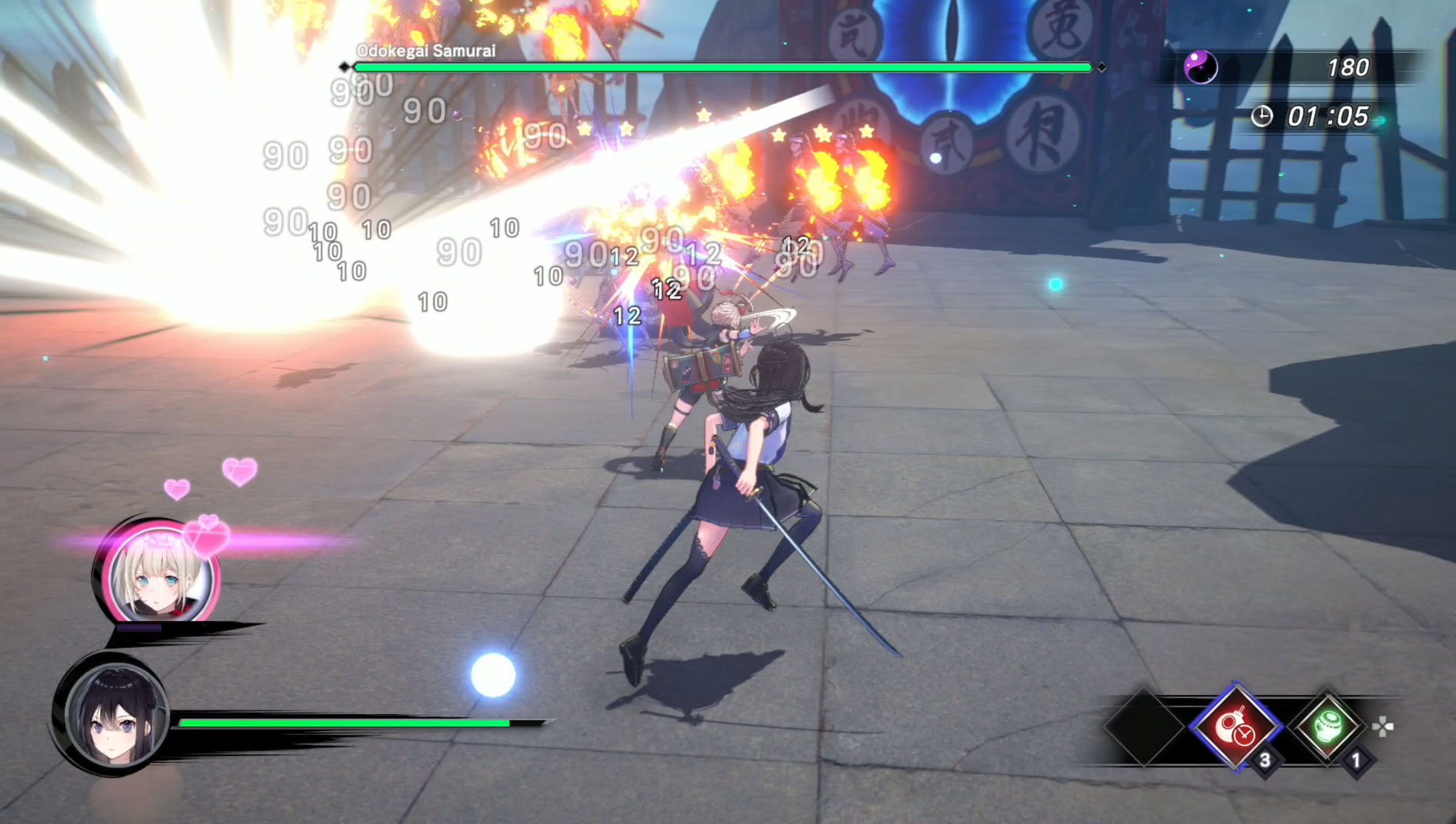 In case the feature image on the review didn’t tip you off, Samurai Maiden is a yuri game, meaning the girls will eventually fall in love with each other throughout the course of the story. After all, when you activate your special sword buff powers, the game transitions to a scene where you get publicly intimate with your ninja partner. Tsumugi will form bonds via bringing them to battle, and will talk/train with them through a series of visual novel segments that may either entertain or bore you depending on your tolerance for anime nonsense and a lot of back-and-forth.

Did I like it? Well, I did skip portions of it because I know where most of the conversations are headed. This isn’t my first anime game rodeo, but if you’re into all the anime tropes and romance bits that entail, you’ll find something to love here.

The bonds you forge aren’t just for show; Tsumugi will gain new moves from being more than friends with the trio. Iyo will give you new sword combos, while Hagane gives you aerial attacks. Komimi will give you quick getup evades and parries, so you’d do well to replay stages to get their relationships higher and higher for those new skills.

As the relationship meter gets higher, you also unlock Pocket Bubble character stories & quests: you bring one of the ninjas through a short puzzle stage and also unlock their new weaponry with skills and upgradeable stats. These also unlock new artwork as well as flesh out the ninja gals’ stories and history further. I’ll have to admit: the Pocket Bubble stages are quick bouts of platforming and simple puzzle-solving fun that made me tolerate the Samurai Maiden experience. 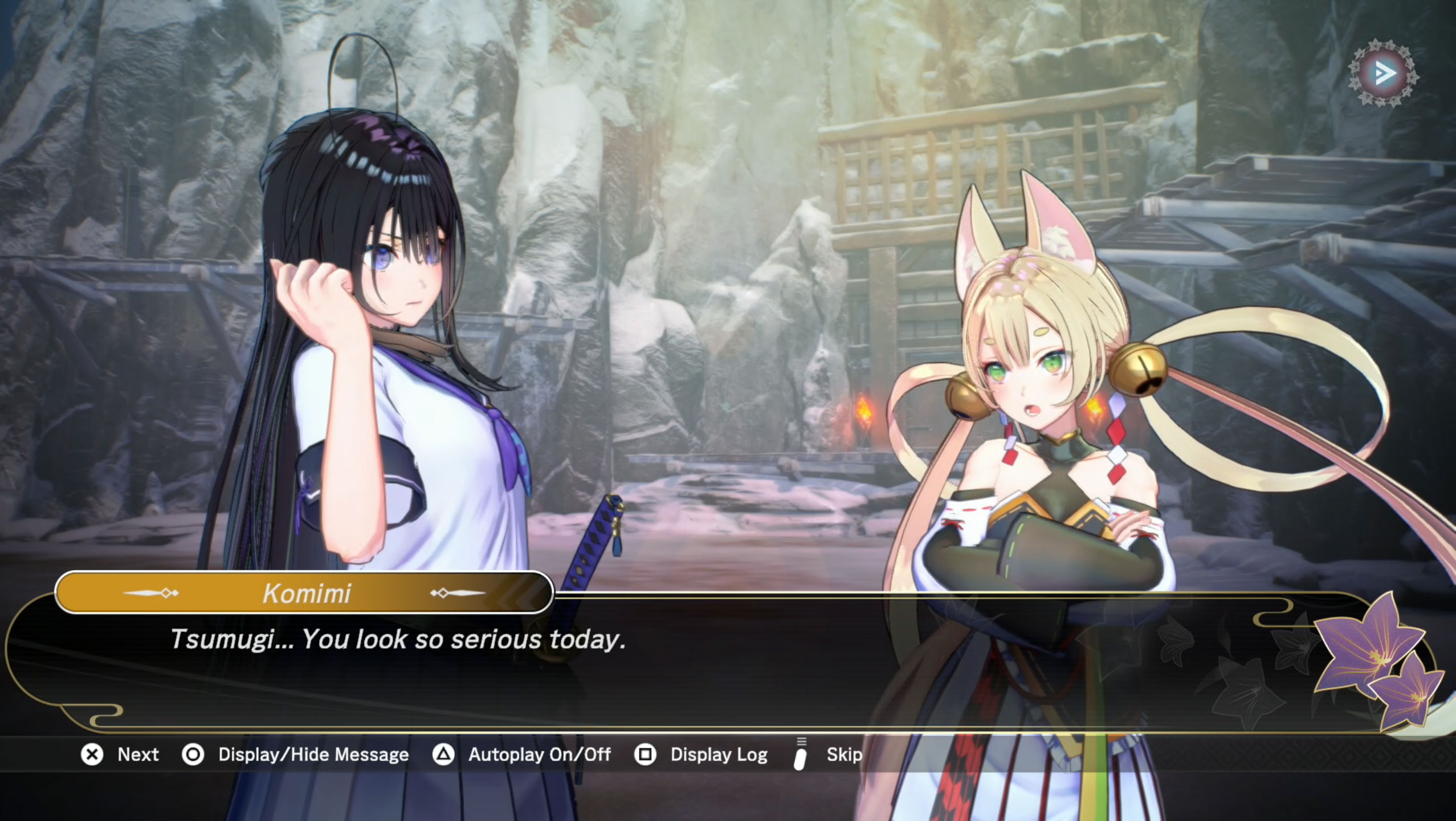 You’ll need all the help you can get here because Samurai Maiden gets downright dirty like a D3 game. You only have one life in a stage; there are checkpoints that give you extra lives, but the undead you face can overwhelm you, at least in the later stages. You have your grunts, your giant heavies, your ogre enemies, your heavy ogres, and a ton of flying skulls that explode in your face. The enemy variety is lacking, to say the least, but they can get cheap and tough to fight especially in droves. The heavy enemies cannot be interrupted at all unless you use the corresponding elements to stun them. Most enemy attacks come out pretty fast and can deal big damage if you’re not careful.

This wouldn’t be an issue if it weren’t for the paltry defense options you have. Some of your heavy attacks have terrible recovery, and your evade isn’t that reliable. Your lock-on completely focuses the camera onto your target to the point where it can get janky and bonkers. When not in lock-on, your attacks somehow focuses on the weakest enemy instead of where you’re pointing your character with the left analog, resulting in a ton of frustrating moments when fighting. Even with the majority of the skills unlocked, enemies can dogpile you really quickly because they cannot be interrupted even with heavy attacks and can just knock loads of life away if you aren’t careful.

The worst part is the game throwing you into some questionable arenas, where you have a big boss type in a small enclosed area that is occasionally on fire, and multiple enemies with area-of-attack body splashes just fill up the screen with little to no room for you to evade and defend yourself. And some of these rooms even have disappearing floors, with the worst part being enemies that fall down will respawn back to the battlefield with nary a scratch. This is just bad action game design.

This leads to many situations where I just spammed my partner’s ninja attacks like no tomorrow. Most of the time, my victories are attributed to luck and how patient I am at kiting & positioning enemies for maximum damage. In an action game that’s supposed to reward you for skill, there isn’t any you can use here save for pure brute force (spamming your ninja assists and your fastest attacks). Heck, your stun and hurt animations recover quite slowly for a game that relies on fast reflexes and counters; don’t get hit unless you want to get juggled to death by ogre splashes and giant undead knockdown slams.

Add to the fact that you have to restart from the beginning of the stage if you die at any time just because of said dogpiling and enemy attrition, and the frustration tends to pile up for each replay. 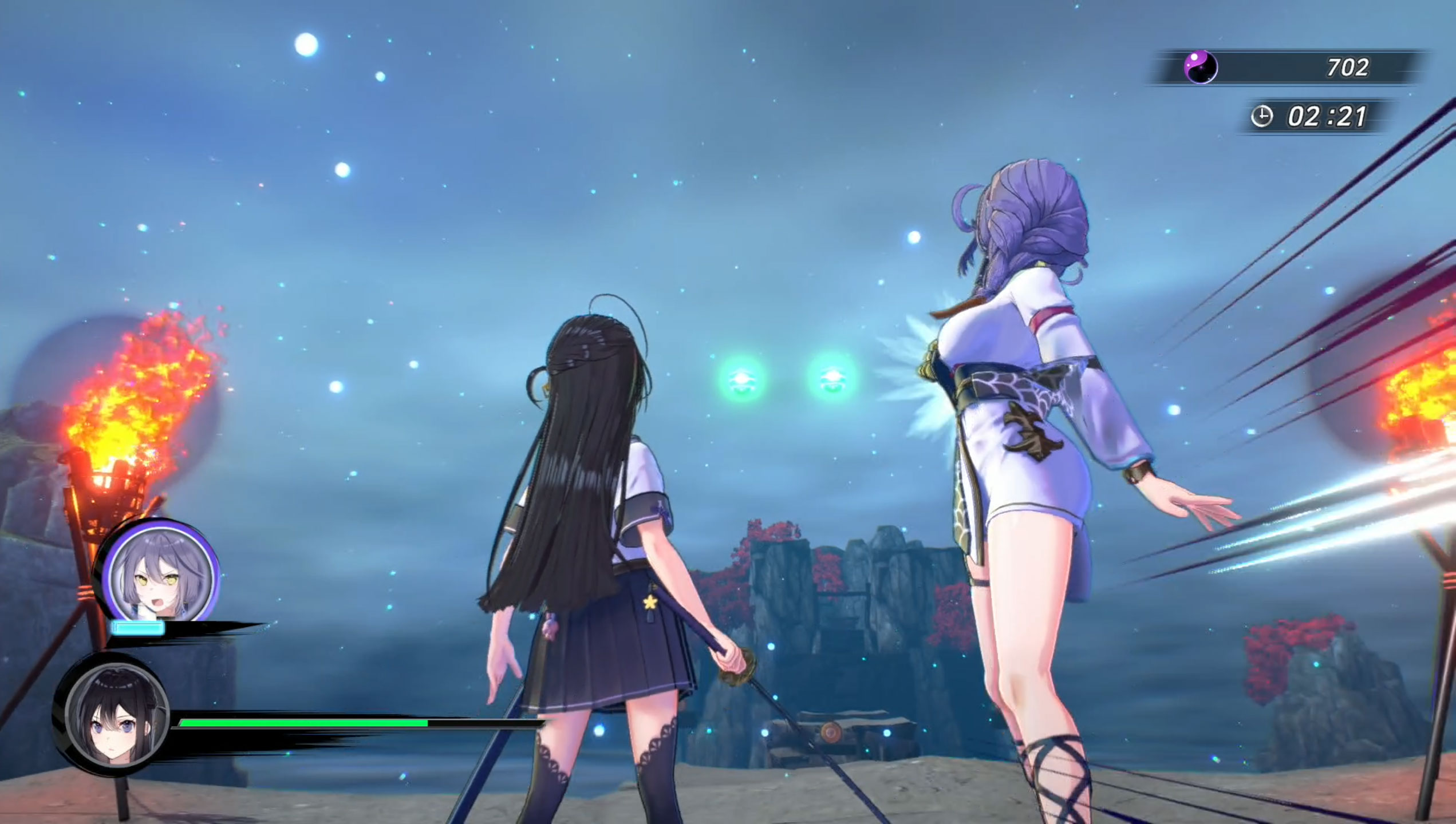 Simple and to the point with its yuri-flavoured storyline and trappings: That’s Samurai Maiden in a nutshell. It’s also quite a chore to play, as you can only get the best skills and powerups through grinding for relationship points with the three ninjas. The game’s attrition-based difficulty and finicky controls really hamper what could have been a brainless fun and sexy romp involving a high school girl with her potential girlfriends from a different era. If that’s the sort of arcade action you crave, by all means, go nuts. At the very least, it does have its moments.

News
E3 2019: The Final Fantasy VII Remake Is The Pinnacle Of The Entire Series

The Final Fantasy VII Remake is clearly a hugely-anticipated title based on the fanboy screams and yelps during the game's showcase in E3 2019 Squar...

News
For Honor Is Getting A New Viking Hero Next Month

Ubisoft has announced that a new hero will be joining the Viking faction as part of For Honor Year 3 Season 3. Owners of the Year 3 Pass will gain acc...

Publisher Electronic Arts and developer DICE have announced that they will release a new Battlefield for consoles and PC in holiday 2021 as well as a ...