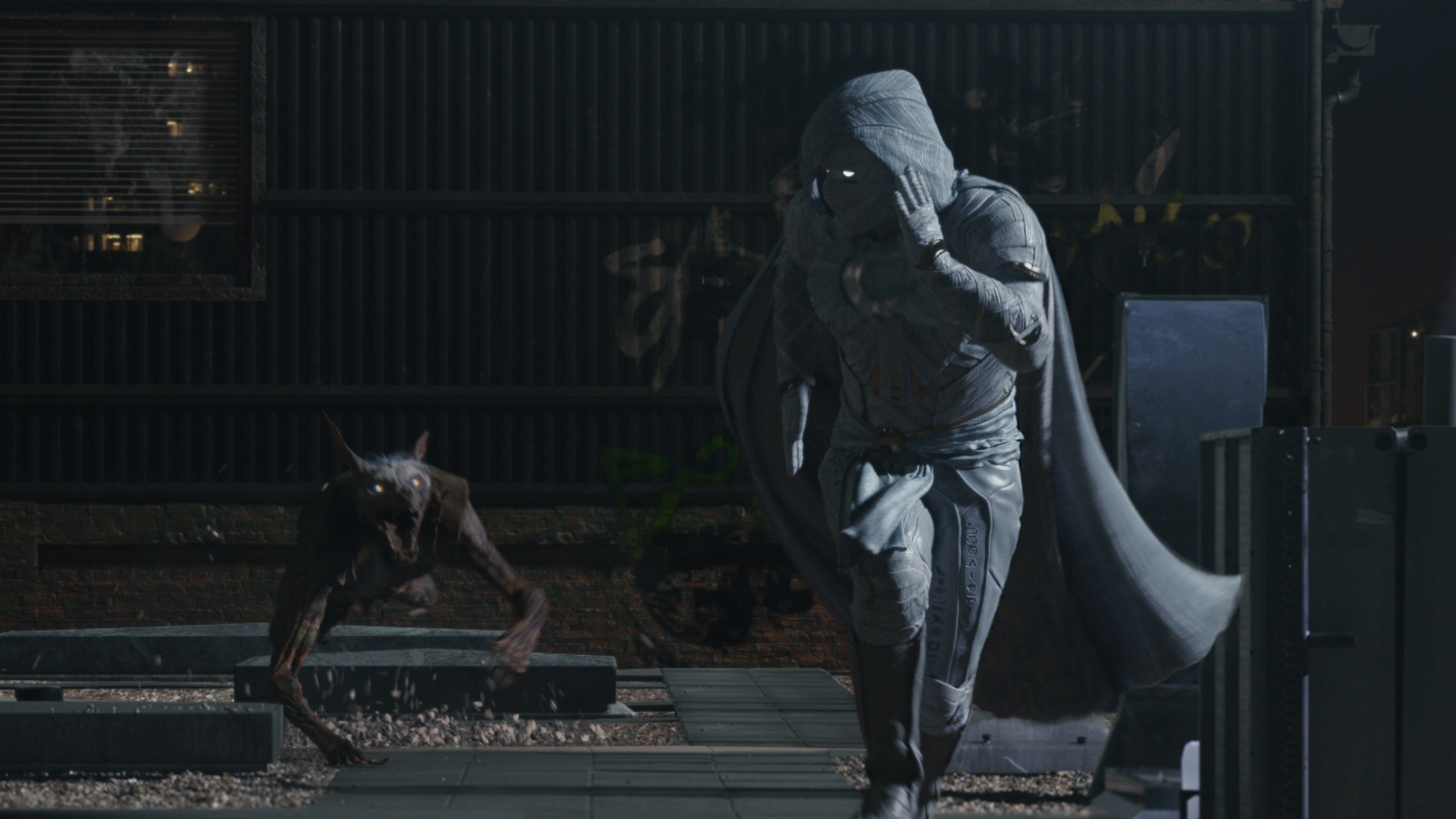 It follows Steven Grant, a mild-mannered gift-shop employee, who becomes plagued with blackouts and memories of another life. Steven discovers he has dissociative identity disorder and shares a body with mercenary Marc Spector. As Steven/Marc’s enemies converge upon them, they must navigate their complex identities while thrust into a deadly mystery among the powerful gods of Egypt.

You can also check out my other interview with Moon Knight directors Justin Benson and Aaron Moorhead by heading over here. Check out my breakdown of Moon Knight Episode 1, Episode 2, Episode 3 and Episode 4 here. This interview has been edited for clarity.

What went into making the lighting in the show look more natural without the usual yellow filter, especially when filming in Cairo and areas in Egypt?

Andrew Droz Palermo: I think we built off of wanting Cairo to feel natural. It should feel like the Cairo that Mohamed Diab knows; one of our directors. A lot of the work in Cairo was done by Gregory Middleton and it’s so beautiful.

You’re right; it’s very natural feeling, the light feels clear and clean. It’s not a tobacco filter or whatever filter they do to go down to Central America when you’re shooting something. I found it very refreshing as well.

I noticed the horror vibes and tones in Moon Knight Episode Four. How did working on The Green Knight, V/H/S and other movies prepare you for Moon Knight?

Andrew Droz Palermo: Yeah, I fell in with a director named Adam Wingard (who directed 2011’s You’re Next, 2016’s Blair Witch and 2021’s Godzilla Vs Kong) pretty early. He’s such a great horror fan and he really introduced me to a lot of films that I wouldn’t have seen on my own. It’s not a genre that I was initially very excited about but now I love them, and every October, I watch as many horror movies as I can as Halloween approaches.

Justin (Benson) and Aaron (Moorhead), my directors on Moon Knight, also loved horror movies, so we were excited to pepper in as much of that as we could and push the show into that world. Like, how comfortable are we with horror, how violent can we get, how scary can we get.

We ended up shooting more than we needed, knowing that we’d kind of peel back on what was allowed on a TV show.

What were your inspirations and influences while Working On Moon Knight? Maybe The Comics?

Andrew Droz Palermo: You know, the comic books were a huge thing for me, and certain runs in particular. Moon Knight was a new character to me, so I started with an Omnibus that has some of the older ones. I started there and there was a couple of other runs that we really looked at.

I really loved seeing the different ways he’s changed over the years, Moon Knight has. The imagery can be very psychedelic and it can be very mind-bending and that kind of gave me the ability to just say; well, anything goes for us as long as it makes sense for the scripts. We can go crazy and we’re not beholden to a, quote, “real world” always. That was very exciting for me as a cinematographer.

What were your favourite scenes to work on?

Andrew Droz Palermo: I really liked the scene between Marc and Harrow in the office (at the end of Episode Four). When he first makes it into the mental hospital, it was just so fun to feel a shift in energy between those two, watching Ethan Hawke kind of change his character into this doctor was really fun.

Oscar is always incredible. He came on set one morning and you knew he was playing this kind of, the character that we hadn’t seen yet in Marc Spector where he was very confused and scared. He was just incredible that day and that was really fun for me to shoot.

What was the biggest challenge you faced during filming?

Andrew Droz Palermo: Well, there are a number of scenes that take place at night over many city blocks. In Episode Two, there was a big fight where Moon Knight is fighting a jackal that you can’t see, which then eventually moves on to the rooftops of London. The scale of that scene was just incredible.

You know, we were lighting up multiple city blocks and it was shot over many, many nights, including other units; the Second Unit led by another cinematographer Darren, collaborating with Darren and the stunt team. Making sure that it all felt cohesive was really hard and I’m really happy with how that sequence turned out. I love the stuff with Moon Knight running on the roof with the jackal chasing him.