Planet Zoo gives you a ton of options and choices on building the perfect animal-filled park, be it a digital safari or a snowy tundra-esque “biodome”. But truth be told, there’s a lot going on in the game thanks to its management options and a plethora of animals to choose from.

So how should you start your zoo-making escapade? Let us help you out with some tips we’ve learned during our time in Frontier Entertainment’s latest sim offering.

Change Your Pause Button To The Spacebar

You’re going to want to pause the game more often than usual; like in those turn-based real-time CRPGs. Even on the slowest setting, time passes deceptively quickly.

If you let the game run while you spend 10 or 15 minutes crafting a habitat, you might find dozens of babies have been born, adult animals have died of old age, or other issues have cropped up. Get in the habit of pausing often; map the button to the spacebar as it’s more accessible.

Do not cave in to the impulse of building a giant-as-heck habitat. It takes quite aÂ  bit of time to start seeing profits match your efforts. Just like any other sim game,Â  build and expand too fast and you’ll lose money quicker than a rich fat guy in a Thai soapy massage brothel.

Each habitat and exhibit you build takes a lot of resources to maintain. So take your time and start small for now. Hire a small amount of staff and adopt a realistic amount of animals in proportion to your design. Expand your enclosure only if you’re making a profit or breaking even.

Create Shared Habitats To Save Money 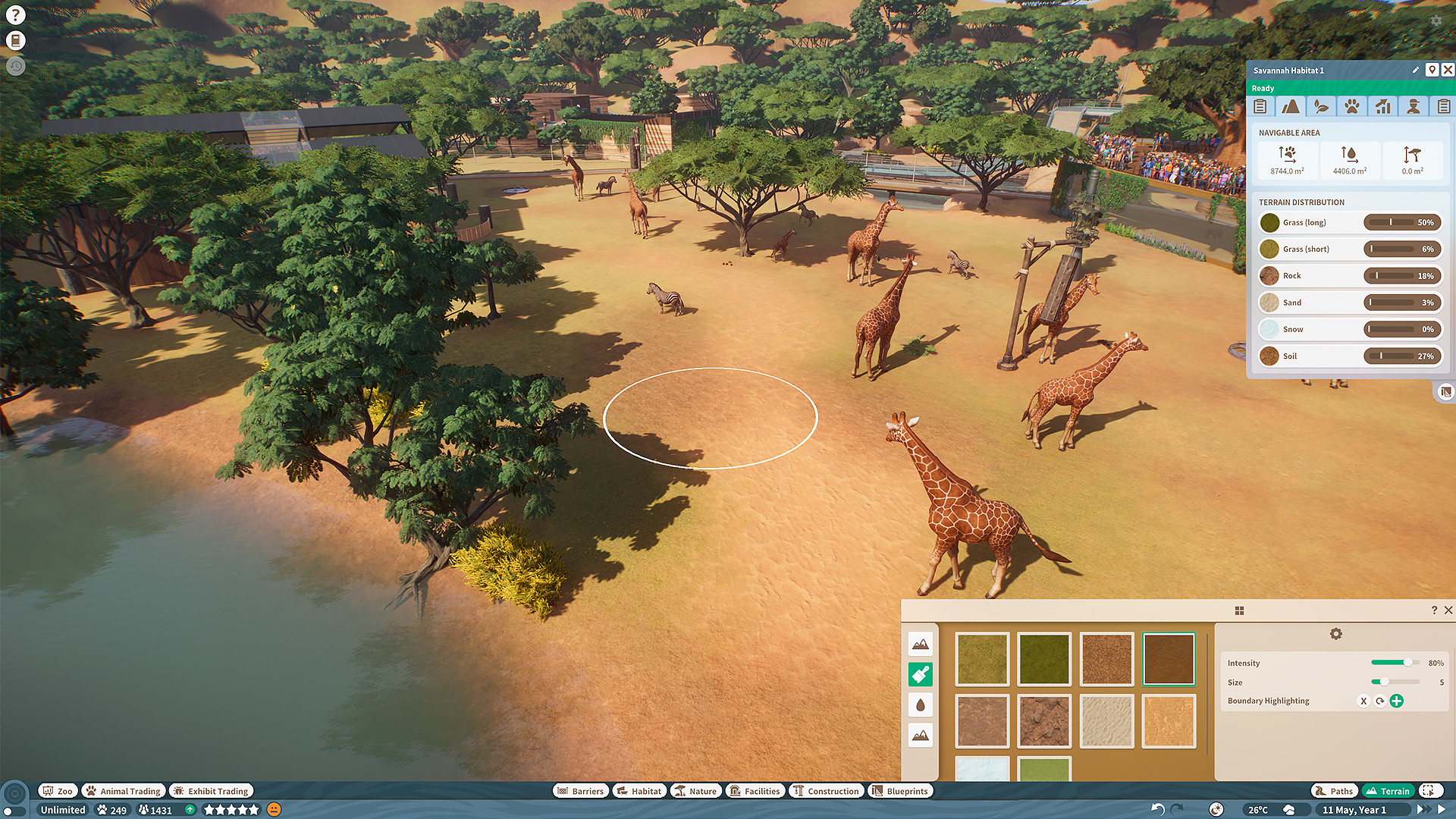 If you’re looking to save money on construction costs and get a lot of value from less land, acquire animals that can share their habitats with different species. Giraffes, buffaloes, warthogs, gazelles, and many others are actually happier occupying the same habitats with certain other speciesâ€”the in-game Zoopedia will tell you with whom they benefit from living.

It’s easier for your staff to manage these animals when they’re all together instead of them being spread out all over the place.Â  It makes it clearer for your guests to see and learn about different animals without getting tired from walking too far. Also, the animals like each other, so it’s a win-win situation.

Make Your Staff Work-Life As Convenient As Possible

If you’ve ordered a mechanic or vet to do research or a zookeeper to handle some important task, you may wind up waiting a long time, and it’s not always obvious why. Your staff members may be bottlenecked because they can’t simultaneously use small facilities.

While one zookeeper is chopping up food, or a mechanic is studying new zoo technology, anyone else will have to wait patiently outside, peering in through the window if it’s the only small facility available. Protip: research can unlock larger facilities that can be shared by more than one employee.)

It might also be down to guest congestion. If your employees are slow getting around, think about building them their own dedicated staff paths so they don’t bump into guests.

Cheat The System To Achieve Bronze

You can unlock the zoo and map in challenge and sandbox modes by completing the first series of bronze objectives in career mode. If this gets tricky, keep in mind that you can balance and tweak the game just to achieve them; the game doesn’t register that as cheating.

For example, if you want to earn a yearly profit of $1,500.00 and get your employee happiness levels over 70% one after the other, you can first lower employee pay to the lowest to get the profit goal. Then crank up their pay to get that happiness rating.

Much like in real life, tourist traps and gift shops can turn frowns upside down for the masses. If you want to get more money out of your guests without pissing them off too much, consider researching souvenir shops first before putting in burger huts and drink stalls.

That way, you can get away with raising admission fees and charging for toilet use. Sure, donation boxes outside habitats are great earners, but Planet Zoo’s guests are more enticed by buying big dumb hats from souvenir shops.

If You Have To, You Can Adjust Loan Repayments

Making a profit with your zoo is hard. So why not resort to loans? To a point, anyway.

Loans can help keep you afloat, and you can adjust the monthly repayments from the loan menu. If you take out a loan, you can adjust how long you want to take to pay it back, which can help you out with lower payments in the short term even if it doesn’t do you any real favours in the long term.

Use this if you 70% think you don’t need to start afresh with a new zoo.

Some of your guests will be jerks. There may be vandals, litterbugs, and even pickpockets hiding among the nice people who just want to look at your zebras and giant snails.

You do you can sic a security guard on them and kick them out. Or, you can just do it for fun. Just make sure they buy a hat first. This goes for individuals or groups;Â  protestors don’t count.

Be Careful When Splitting Habitats 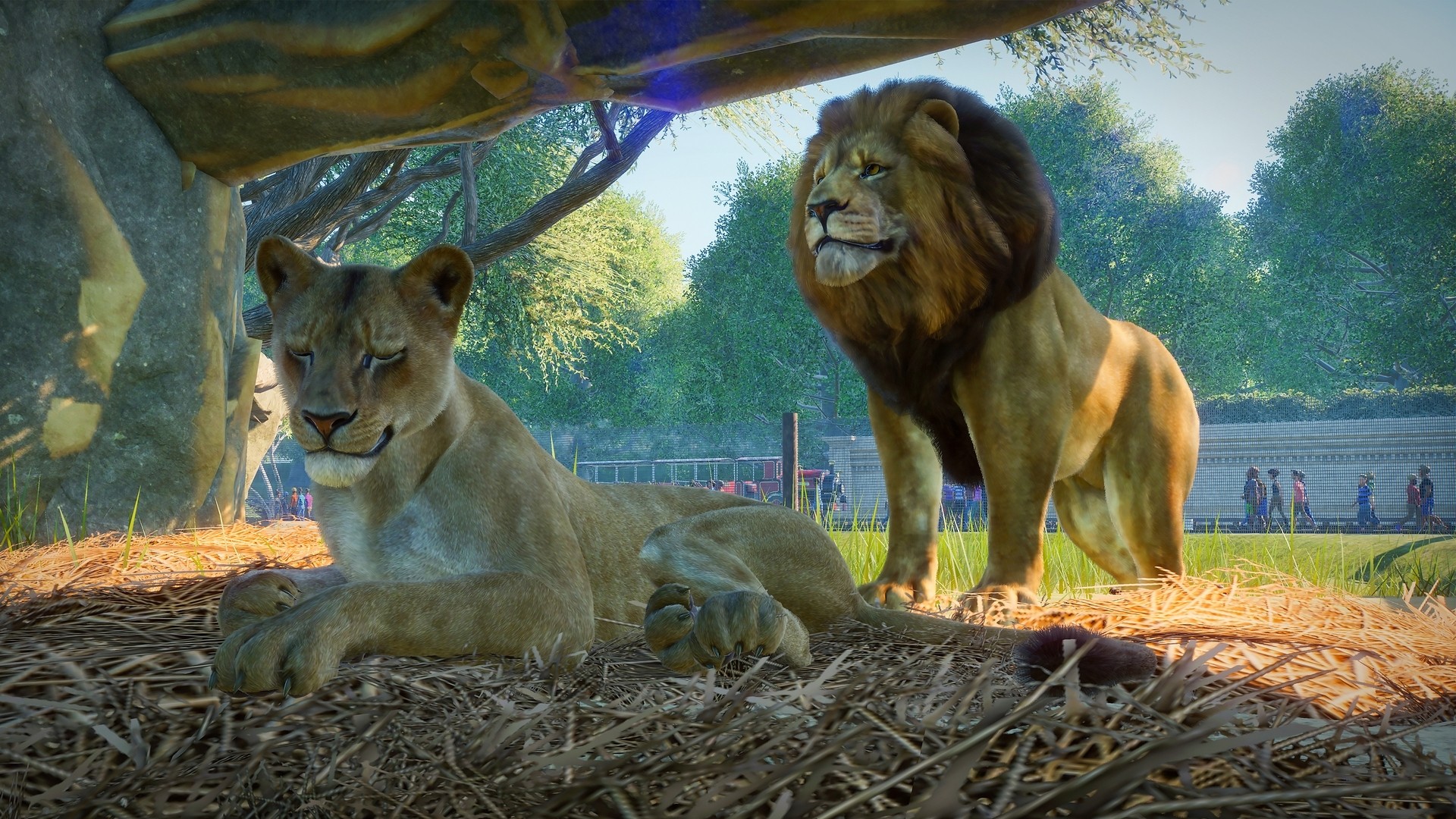 There will come aÂ  time when you need to expand your zoo, which also means splitting habitats.

It’s easy enough to draw some barriers through the middle and turn that huge habitat into two smaller ones. But before doing that, make sure the gate winds up in the same section the habitat’s current resident is in.

If you divide a habitat in half and the animal is in one half but its gate is in the other, Planet Zoo will decide the animal has escaped. Even if that one bear or tiger is sleeping while you’re doing this, the game will still make that decision.

When All Else Fails, Make YourÂ  Animals Immortal

It’s heartbreaking to see your animals die from starvation and diseases from your neglected animal-caring duties. If you’re playing on sandbox mode, you can turn animal mortality options off and make them live forever. It’s unrealistic,Â  sure, but this at least makes you focus on the animal zoo designing aspects better. After all, the game is called Planet Zoo, not Planet Veterinary.

Genshin Impact, the game that everyone is still playing and doing humblebrags with their gachas, just received a new update. Dubbed 1.1, this update a...

Final Fantasy XIV, the hit MMORPG that's been around for eight years and is beating Blizzard at its own online game, has reached a new concurrent play...